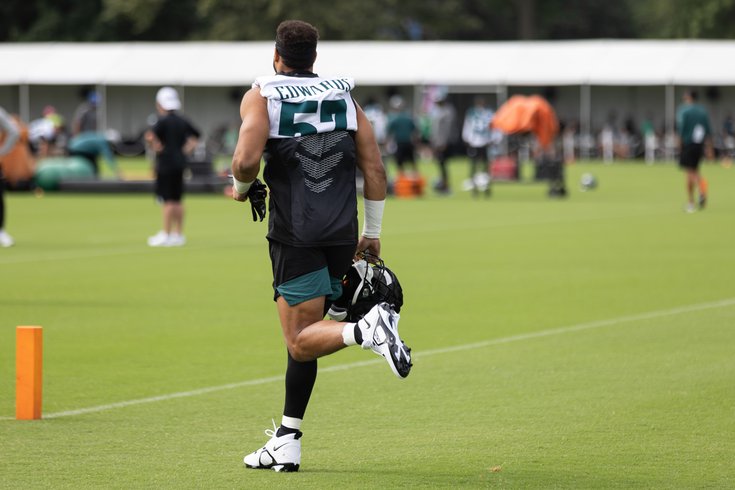 Back before training camp began, a lot of people assumed the Eagles would be moving on from T.J. Edwards — the team's undrafted free agent linebacker who had 130 tackles in 2021.

The Eagles had notoriously not really paid much attention to the linebacking spot in recent years, and Edwards kind of broke out at a neglected position, with the NFL becoming so pass happy that defenses adjusted by adding more defensive backs to counter.

Philly kind of changed its tune this past year, signing big name free agent Haasan Reddick (more of a pass rusher but still technically a linebacker), another free agent in Kyzir White and drafting Nakobe Dean in the third round of the NFL Draft.

Did that means Edwards was going to be the odd man out? Or at least lose a bunch of snaps at LB this season?

NFL pundits making their predictions for the team's starting lineups may have moved on from Edwards, but his own coaches know what they have in the 25-year-old and are not writing him off by any means.

"He is making a lot of plays for us, and that's why you saw him take over the defense, kind of the first third part of the year or whatever. We expect him to do that this year as well," Eagles defensive coordinator Jonathan Gannon said back on Friday. "I didn't scout him coming out, but when I got here, you read everything and you talk to different people that looked at him and things like that. I think that if there were a couple negatives on him, they are not negatives with what we're asking him to do. Actually, they're positives. Excited to have T.J."

On Thursday morning, Edwards continued one of the biggest breakout performances in Eagles training camp as he nearly made two impressive interceptions and helped prowl the middle of the field against Jalen Hurts and the struggling offense.

One of the biggest things Edwards brings to the table, as he showed in 11-on-11 drills Thursday is his ability to drop back in coverage. In contrast to a player like Reddick, Edwards can be a player the Birds rely on during passing downs and it's definitely something that will help keep him on the field even with such tough and talented competition at LB.

"I have a good feel for the game," Edwards said when asked about his coverage abilities, "a good feel for recognition, now going on Year 4 I have seen a lot in terms of route and where everyone fits and I work my tail off in the books, studying as much as I can. It has really given me an edge because I think instincts are everything in this game."

A wrinkle for Edwards in his fourth year is having A.J. Brown lining up across from him in practice every day. In his time with the Eagles, they haven't exactly had the deepest receiving corps. Brown and Hurts have shown they have chemistry early in their tenure a teammates and Brown feasts in the middle of the field.

Edwards just happens to be the man most often responsible for protecting the middle of the field. And going up against the big free agent acquisition is certainly going to help prepare Edwards and the rest of the defense for a similar threat from opposing offenses this fall.

"He is a physical specimen," the linebacker from Wisconsin said of Brown. "He is catching the ball like a running back, it helps us a lot because he is fast, he's quick, he's also strong — so you have to be able to catch up with him and also make sure you are making a sure tackle on him. You see what he does and the kind of player he is."