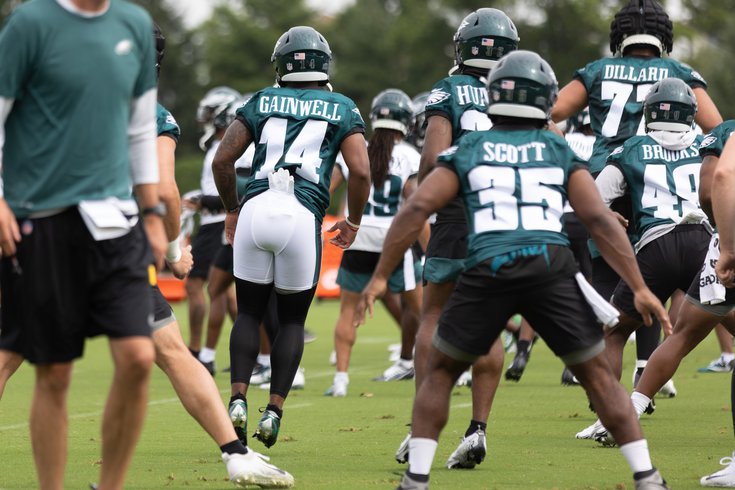 As Eagles fans know, the team switched to a rush-heavy attack during the second half of last season, leaning hard on their running backs on the way to a playoff berth. Rookie Kenny Gainwell came on strong during that run with six total touchdowns on just 101 touches. He was one of five rookie backs to reach that TD mark despite only being the third- or fourth-string RB at times on the Birds' depth chart (via Stathead).

Gainwell could take another jump in his sophomore season. He's been an integral element of the Eagles' offense early in training camp, getting time with the first-team offense in a rotation with Miles Sanders and Boston Scott. His versatility as a receiver has been a feature of his game. He had 51 catches as a redshirt freshman in 2019 with Memphis, his last collegiate season. Quarterback Jalen Hurts has targeted him a ton during the Eagles' early camp practices too.

"Kenny's a great player. Definitely made big-time plays for us last year. Catches the ball well, runs the ball well, hits the hole. He does a really great job," Hurt said. "I've seen his mindset change. I've seen his approach to things, I've seen it change. And I know he's hungry. I love a hungry guy on my team. So I'm excited to see him go at it this year."

"Hungry dogs run faster" is likely a cliche in the Eagles world by now, but just like "daily deposits" and "dog mentality," I'm going to keep picking up on the buzzworthy beats. The Birds are big on all of those and it's the optimism of August that has Eagles fans gobbling it up.

Gainwell is ready for his second season in midnight green. Speaking about what's changed between his rookie campaign and now after Tuesday's practice, Gainwell said, "Just being in this same organization with Coach Nick. Just doing everything I had to know last year... I just feel great about it going into Year 2."

Comparing Gainwell to another NFL player whose mold he could take on, I look to his former Memphis teammate and current Cowboys RB Tony Pollard. Gainwell isn't as gifted as a pure runner as Pollard, who works as a change of pace back behind Ezekiel Elliott in Dallas. Pollard and Gainwell's respective rookie numbers are actually pretty similar though:

Pollard is a bit better as a runner, but Gainwell tops him as a wideout. Pollard did catch 104 balls across three college seasons in Memphis, but Gainwell's effectiveness in his lone starting season with the Tigers and last year with the Eagles makes his ability as a pass-catcher clear.

What I like about Gainwell's skillset is that the different ways he can be productive as a receiver. He's a screen threat and Hurts' security blanket for checkdowns out of the backfield, but he's been utilized a lot this summer in the slot. The shiftiness he presents lined up there brings a different element than what starting slot receiver Quez Watkins and vet Zach Pascal do.

"I've been doing that all my life," Gainwell said about working out of the slot. "I played quarterback in high school, but I also played slot, I played the position in college. I feel comfortable with each and every spot on the field. I'm taking advantage of my opportunities."

Nick Sirianni and Shane Steichen's offense will have a solid set of playmakers that can be optimized in different ways. During Tuesday's practice alone, there was a play where A.J. Brown motioned into the backfield for a jet sweep touchdown. Gainwell and fellow running back Boston Scott are getting time lined up as receivers. In this offense's second year in Philadelphia, staying creative will be a necessity as opponents catch up to what worked well for the Birds in 2021. Whatever the game plan ends up looking like this fall, it would be wise to have Gainwell as a big part of it.