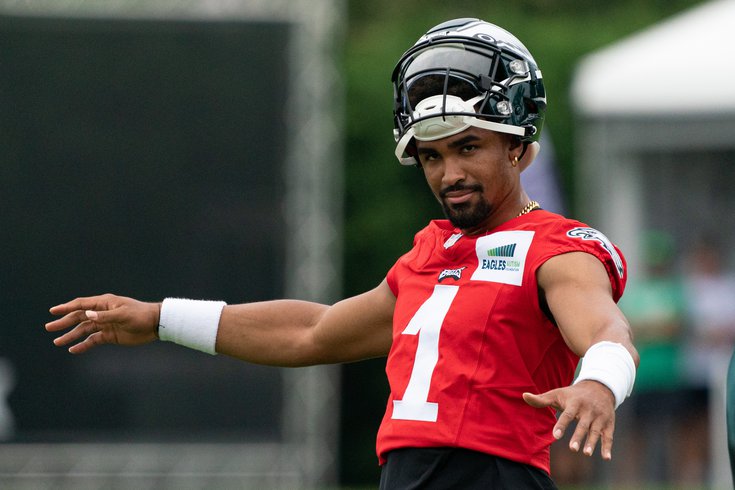 Eagles fans have a reason to get hyped after the team's Tuesday morning training camp practice. Jalen Hurts turned in his best performance of the summer, a much-needed step up following a few inconsistent performances. The third-year quarterback chucked a nice deep ball and continued to thrive on over the middle throws, primarily to new star wideout A.J. Brown. Critiques over the past week have been warranted, but Hurts had the goods on Tuesday.

As I've done throughout camp, here's a play-by-play breakdown of how Hurts looked:

• Play 1: The Eagles go play action and roll Hurts out right. He targets Miles Sanders, who drops the pass on what would've been a "touchdown." The throw was a tad low, but in an actual game setting, it needs to be hauled in.

• Play 2: Fun wrinkle here! A.J. Brown motions before the snap from the right slot into the backfield next to Hurts. Hurts hands it off to Brown on a jet sweep of sorts, as Brown finds the end zone. It's the type of "Madden" play that would have Eagles fans going wild if it happened at Lincoln Financial Field.

As they did last week, the Eagles got in some 1-on-1 work between receivers and corners with quarterbacks rotating in and out. These are the throws Hurts made...

• Play 3: It's a perfect touch pass from Hurts down the sideline to DeVonta Smith, who effortlessly hauls it in. I'll chalk this up as a "touchdown," even though this isn't true live-action football.

• Play 4: Great touch yet again from Hurts. He hits Brown along the right sideline, targeting the receiver's back shoulder. It's an even better catch from the Pro Bowl receiver, who hauls it in even with Darius Slay draped on him.

• Play 5: Deon Cain is up. Cain spent the 2021 season on the Birds' practice squad. He's a bit of grinder who's always practiced to the max. Cain runs a comeback route and Hurts hits him for the completion. Nice snag from Cain with Kary Vincent on him in coverage.

• Play 6: Lance Lenoir alert! The Birds signed the 27-year-old vet in July and Hurts finds him for an easy catch after Lenoir shakes and bakes the defensive back.

• Play 7: Another Brown and Slay battle. Hurts looks middle of the field for Brown, who makes the catch even with Slay's sticky coverage. I wrote on Monday that Hurts had begun to find success in camp targeting the middle of the field on slants, something he rarely did in his first two NFL seasons. The Eagles would be wise to dial up these routes come the regular season.

• Play 8: Hurts tries to find Smith along the left sideline, but James Bradberry is all over him and makes a great play on the ball. Big pass breakup.

• Play 10: Under center, Hurts fakes a handoff to a running back with Jalen Reagor coming back the other way for a reverse/jet sweep. Hurts flicks the ball to Reagor who bobbles it and is never able to get full momentum to break off a big gain. I like the creativity, but poor execution on Reagor's part.

• Play 11: It's another play-action look, as Hurts goes over the middle to Brown with no one in front of him. Given where he was on the field, it's hard to chalk this one up as a "touchdown," but in a real game, Brown probably takes this one to the house.

• Play 12: Play action again. Hurts rolls route and targets Dallas Goedert, but the ball soars over his head. Not an ideal throw.

• Play 13: I get some Darren Sproles vibes on the route Sanders runs out of the backfield and Hurts connects easily with him in the second level of the defense.

• Play 14: The Birds go read option and Hurts keeps it up the gut. I'll say it's a gain of five-ish yards. Again, it's hard to evaluate running plays when there isn't live tackling.

• Play 15: Hurts finds Goedert on a comeback route over the middle. It was soft coverage and I don't think it was Hurts' primary read on the play. It was deeper down the field than the frequent checkdown passes he had been throwing in this type of setting earlier in camp though.

• Play 16: Hurts is slow on the release targeting Brown to his left. Bradberry, covering Brown, has tons of time to make a play on the ball and breaks it up.

• Play 17: It's Goedert in the middle of the field again, as Hurts connect for a gain of 15-ish yards.

• Play 19: Tight end Noah Togiai runs slants right across the middle, Hurts throws to him and the ball goes off his hands. It wasn't the greatest ball placement ever, but should've been a catch.

• Play 20: Lining up under Center, it's a play-action bomb to Reagor, who burns cornerback Zech McPhearson and blows by the defense even with safety help over the top. Easy call on recording this one as a "touchdown." Props to Reagor following a misfire earlier on a manufactured run and a rough Monday practice.

• Play 21: Hand off up the middle to Boston Scott.

• Play 22: Hurts rolls right and is off the mark throwing to Brown. The ball is in front of him as Brown streaks right on a crossing pattern.

• Play 23: The Eagles stack two pass-catchers to the left in Smith and tight end Jack Stoll. Hurts immediately throws to Smith with Stoll acting as a blocker on this screen. I love the call.

• Play 24: It's a crispy throw from Hurts to Brown on, you guessed it, a slant. Hurts does a mini first down celebration that turns into a handshake with Brown as this specific practice period ends.

• Play 25: Inside handoff to Sanders.

• Play 26: Scott, lined up in the slot, runs a slant. Hurts finds him with ease, but it's a bad drop for the Eagles' backup running back.

• Play 27: Kenny Gainwell motions into the backfield and it's a low/fumbled snap. It looked to be a false start on the center here, but Hurts indicated after practice that the defense was offside here. It was a broken play, but Hurts recovered and found Reagor open on the left side of the field for a diving catch. Weird play that's atypical in practice, but Hurts is able to make something out of nothing, something Eagles fans have seen during the regular season, and a great snag from Reagor.

• Play 28: Hurts' first couple of reads aren't there as he dances around the pocket. He starts to roll out right, but Josh Sweat is in there for a "sack." (obviously QBs can't be tackled in practice)

• Play 29: Hurts lofts a pass on a crossing route to Brown, who hits the DB with a juke button move after making the catch.

• Play 30: On his final throw of the day, Hurts goes deep to third-year wide receiver John Hightower down the left sideline. It's underthrown and Bradberry makes an incredible play to get his hand on the ball and break it up. Great practice from Bradberry on Tuesday.

Hurts' first training camp performance on Wednesday was encouraging and I gave him a B+ (almost an A-). He struggled on Friday, Saturday and Monday, however, with me giving him a C+ the next day. I'll go with a high B+ here. Recovering from that early inconsistency is exactly what Eagles fans want to see at this point in the summer.

The Eagles take the practice field in front of the media and fans again on Thursday after a walkthrough on Wednesday.