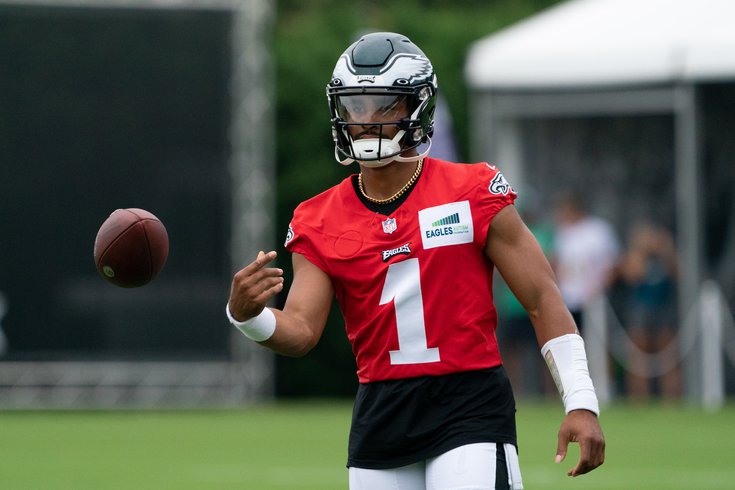 Jalen Hurts during one of the Eagles' 2022 training camp practices.

The second week of Eagles training camp kicked off on Monday. It was an uneven first week of camp for Jalen Hurts, as he looked sharp on Wednesday before struggling at times on Friday and Saturday. I wouldn't say Hurts struggled during Monday's team drills, but his performance was a bit blah with some decent throws mixed in. A day filled with checkdown throws doesn't move the needle much even if those might be smart decisions come the regular season.

As I've done for practices so far in camp, I tracked every play when Hurts was out on the field at the NovaCare Complex in 11-on-11 and 7-on-7 settings. Here's what I say from the Birds' third-year quarterback on Monday:

• Play 1: It's a read option keeper to the left for Hurts. He hits the juke button on a linebacker in the flat.

• Play 2: Hurts hands it off right to Boston Scott.

• Play 3: Hurts drops back. The first read isn't there. He steps up in the face of pressure and hits DeVonta Smith over the middle 20-ish yards down field. The throw was a tad, tad behind Smith, but I would still chalk it up as a good ball.

• Play 4: It's another handoff, this time to Miles Sanders, who takes it and dashes to the end zone.

• Play 5: The Eagles go play action and Hurts checks it down to the right flat to Dallas Goedert.

The next time the first-team offense takes the field, it's for 7-on-7s from the 20-yard line working downfield...

• Play 6: Hurts finds A.J. Brown on a comeback route right inside the left sideline. The throw is on the mark with a little simple pitch and catch. Nice toe tap move from Brown too.

• Play 7: Hurts goes to Brown once more, hitting him underneath to his right.

• Play 8: Hurts works through all of his progressions and doesn't see anything he likes. He holds onto the ball for a while before tucking it and running to his right upfield.

7-on-7 work probably isn't when the coaching staff wants to see Hurts run the ball. I get not zooming the ball into double coverage into a defensive back's chest, but Hurts has showcased a willingness in camp already to try throws he might not normally make in games because there are zero consequences for that right now. He made mistakes, including turning the ball over, when doing that last week, so perhaps he was making a conscious choice not to do that this week.

• Play 9: It's an underneath throw in the middle of the field to Jalen Reagor, who's in for a rare first-team rep.

The plays where Hurts has looked best this camp are in the red zone (which was only done during last Wednesday's practice) and crosses/slants across the middle. While Hurts isn't making any "wow" throws in camp, he's succeeding working a section of the field he barely targeted in 2021. It was all right-sided throws for him with little action in the middle of the field or to his left. This appears to be something the team is driven to fix, as Hurts has done his share of both four practices into training camp. Going to his left still has room to grow for sure, but he's looked good with zip on those over the middle passes.

• Play 10: Hurts' first few reads are there and he dumps it off to Boston Scott to his right.

• Play 11: Hurts goes read option run left. These plays aren't really telling when it's a practice in just helmets and shoulder pads with nothing close to full contract, but Eagles fans know those can be big gains for Hurts when things actually matter in the fall.

• Play 12: Another slant! Hurts finds Brown over the middle. People joke about Michael Thomas in New Orleans only being able to run slant routes and how Drew Brees would just force-feed the receiver there. Brown is way more versatile (and just overall better) than Thomas, but the Eagles should be looking to target Brown on those type of plays in the regular season. It suits Hurts' development well and gives Brown the ability to rack up YAC and break tackles for larger pickups.

• Play 13: It's another underneath play to Goedert to Hurts' left.

• Play 14: Given the light practice conditions, it's hard to call a play a "sack," but Hurts held onto the ball for a while and the defensive line collapsed the pocket before Hurts get a throw off. The whistle was blown. Props to rookie Jordan Davis for being a force on that interior rush.

After the second-, third- and fourth-team QBs get their reps in, Hurts and the first-teamers trot back out there for their last work of the day...

• Play 16: Hurts tries to go beyond just a marginal checkdown gain there. He lofts the ball 25-ish yards downfield on the run to his left to Goedert. It would've been a tough catch, but it nevertheless hits Goedert in both hands for a drop. I'll still call it a nice throw from Hurts!

• Play 18: Hurts chucks it a bit off balance to Brown streaking towards the right sideline. Brown is open and the opportunity was there for Hurts to loft one in, but it's an overthrow. Hurts' middle of the field work today was encouraging, but this was his worst throw of practice. Hurts has to connect with Brown when things matter for real.

• Play 19: With Hurts under center, it's another handoff to Sanders.

• Play 20: Hurts finishes up the day with what had been a strength for him: an over the middle slant completion to Boston Scott, who was lined up in the slot.

To sum up how I feel about Hurts so far this summer, it has to be said that Hurts' game isn't built for a practice setting. He's not built for this setup. He's a player who's at his best when he's moving around, avoiding legitimate contact and making plays with his legs. That's all minimized here. That obviously is an indictment of who he is a passer to a degree, but he's not going to be Sam Bradford dunking his way through practice while shriveling up on NFL Sundays. Continuing to make strides with his over the middle throws and getting more reps throwing to his left are easily achievable goal for him over the next couple of weeks.

I'll give Hurts a C+ for the day. I gave him that same grade on Friday and Saturday, but I would say this is a "higher" C+ than what I saw from him those two days. I just couldn't bring myself to go B- for a Checkdown Charlie performance even though I wanted to lean that way. The floor was higher for Hurts on Monday, but more explosive plays need to come, especially during 7-on-7s, which should be money for offenses and QBs. The Birds will back at it on Tuesday morning and, yet again, all eyes will be on Hurts to see if he can take a leap during camp.