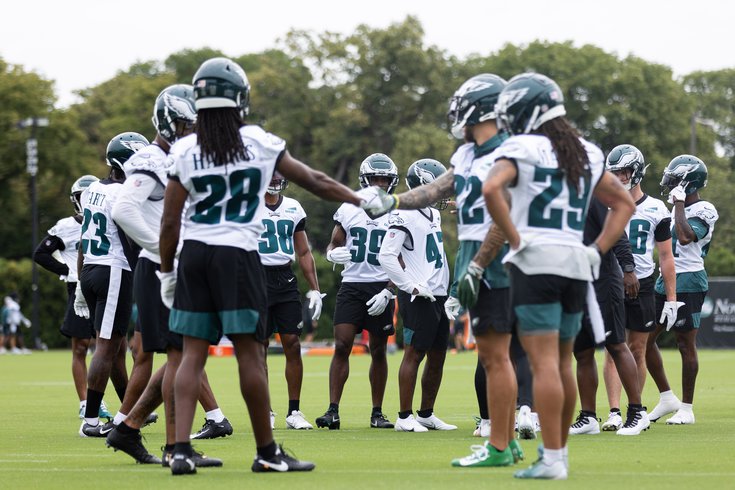 Jason Kelce cut to the chase when it came to the early returns on the Eagles’ offense after last Friday’s practice at the NovaCare Complex.

About to enter his 12 NFL season, Kelce, who had been limited due to a recent bout with COVID, hardly seemed concerned, though.

“I’d have to go back and look at more on tape. The defense probably feels that we got the better of them the first day [Wednesday] and they came out here with a lot of energy and effort [Friday]. And that’s what you want to see.

“You want to see both sides of the ball competing against each other. I think that’s going to make us all better.”

The ebb and flow continued to tilt the defense’s way on Saturday and honestly, Kelce’s declaration of a “win” for his side on Day 1 could be debated because that session was heavy on red-zone work and touchdowns change perceptions.

There are two themes at play here and they are not mutually exclusive. The offense hasn’t been very good early in camp and that assessment is probably not all that meaningful, at least not yet.

When talking about spring work and critics making grand declarations, the NFL Network’s Mike Garofolo likes to say, “We don’t play football in the spring.”

You can actually take that sentiment a step further and realize we aren’t even cosplaying football until the pads come on, especially for this Eagles offense, and that will not happen until this week.

Move forward from there and most already understand Jalen Hurts isn’t a “practice player,” per se because the limitations of early whistles eliminate a lot of the headaches the second-year starter gives opposing defenders.

The physicality of professional football is heightened in Philadelphia right now because the clear strengths of Nick Sirianni's offense are the offensive line, along with Hurts’ unique standing as a plus-one in the running game.

The raw size and power of Jordan Mailata, Landon Dickerson, and Lane Johnson, as well as the technique, intelligence, and savvy of Kelce, show up when you actually let them out of the bucking chute. Hurts, meanwhile, might devastate a defense with off-schedule magic on game day that’s left in the ether by a quick whistle in camp.

Think of the Eagles’ first three days like a political race.

The early returns look bad but the Associated Press is hardly ready to call things because the key counties (in the case, joint practices against Cleveland and Miami) have yet to be assessed.

The media, though, can only report on what’s available to them and there have been troubling signs each day for Hurts, starting with Marcus Epps’ interception in practice No. 1 when the young safety was able to undercut Dallas Goedert in the end zone because the throw came out way too late.

“The game has kind of slowed down for me,” said Epps. “So I’m not swimming out there, thinking of what my assignment is. I already know what that is. So now I’m thinking more of what the offense is going to run, situational things like that.”

Sirianni and offensive coordinator Steichen would like to see the game slowing down for Hurts as well but on Friday it was Avonte Maddox sniffing out a corner route to Goedert and baiting the QB1 to throw it before showing off an impressing vertical leap.

“I just baited him a little bit and let him clear it out and I took one step up knowing I’ve got the leverage on [Goedert],” Maddox admitted.

Saturday was the worst faux pas of all when memories of Tampa came rushing back as Hurts leaked left, his Zoolander-like Kryptonite, and instead of just folding and heading to the next rep, the young signal-caller threw across his body to the middle of the field where Andre Chachere, the young bubble player who will likely be using his off day to shop for thank you cards, corralled the gift.

“Any time you turn the ball over you're not going to be happy with the results on offense,” Sirianni admitted before praising his defense and planting his tongue firmly in cheek. “... I'm the head coach, so I guess when something like that happens I get to go to the side and let Shane be mad about the interception and I can celebrate with the defense.”

There’s still time for the levity but the calendar has turned to August and the elephant eyeing this room is Hurts, who looks an awful lot like the 2021 version – good but not good enough.

John McMullen is a contributor to PhillyVoice.com and covers the Eagles and the NFL for Sports Illustrated and JAKIB Sports. He’s also the co-host of “Birds 365,” a daily streaming show covering the Eagles and the NFL, and the host of “Extending the Play” on AM1490 in South Jersey. You can reach him at jmcmullen44@gmail.com.