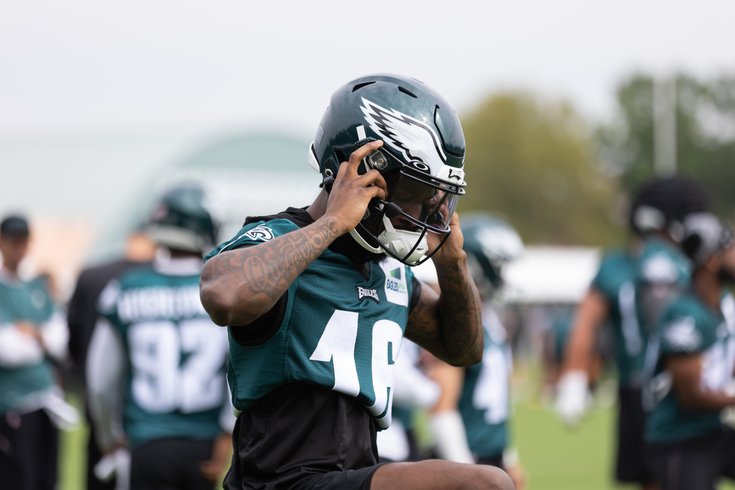 The Eagles have a pure burner at wide receiver and Quez Watkins knows it.

When asked if he's the fastest player on the Eagles' roster after Monday's training camp practice, Watkins, with total confidence, replied, "I'm the fastest guy in the NFL. That's what I believe and I'm standing on that."

Let's see what the numbers say!

Looking at some of the data provided by the NFL's Next Gen Stats, Watkins wasn't quite the fastest player in the league in 2021, but he was definitely able to turn on the jets. On his 91-yard catch in Week 2 against the 49ers, Watkins reached a maximum speed of 21.62 miles per hours, the 14th-highest mark a player hit last season. The third-year wideout from Southern Miss probably isn't the fastest player in the NFL, but I respect the bravado coming from a receiver. That's the energy it takes to be successful at the position.

Watkins' speed is apparent for anyone who's watched him in game action, but his most noteworthy play through camp so far is one that he didn't make. Quarterback Jalen Hurts launched a pass deep down the right sideline that was just out of reach for Watkins on Saturday. Nick Sirianni was not a big fan of Watkins' effort on that one. Here's what I wrote about that specific play when charting Hurts' throws during Saturday's practice:

Play 22: The Eagles air this one out. Hurts drops back and targets Quez Watkins deep down the right sideline. The throw looks perfect, but Watkins doesn't come down with it, a little out of range of his hands. Head coach Nick Sirianni was not happy with Watkins on this one. "THAT HAS TO BE A TOUCHDOWN!" Sirianni yelled at Watkins following the play. It was in an encouraging manner, but Sirianni's tone seemed to indicate that Watkins was dogging it a bit on that route and it cost what would've been the top highlight play of the day. I wonder how the opinion of Hurts shifts today if that play goes for a "touchdown," the beat writers tweet up a storm about it and Eagles fans get hype online. Breaks of the game!

"You got to let them know what you think about each play or the correction's not going to go on. So we're doing that with every single play. Sometimes my delivery is harsh and some times my delivery is with an arm around him, just whatever I'm thinking at that time."

Watkins owned up to that play too, a welcomed sign for a teachable summer moment.

"Nick knows how fast I am and how fast I can be and he knows I wasn't going all out," Watkins said on Monday. "At the time, he let me know about it, so, for me, I just need to always give it my all and he knows I can make those plays and that's what I need to do.

Watkins wasn't the fastest player on the field Saturday given that specific slip-up, but come Week 1 in Detroit, he sure might be.