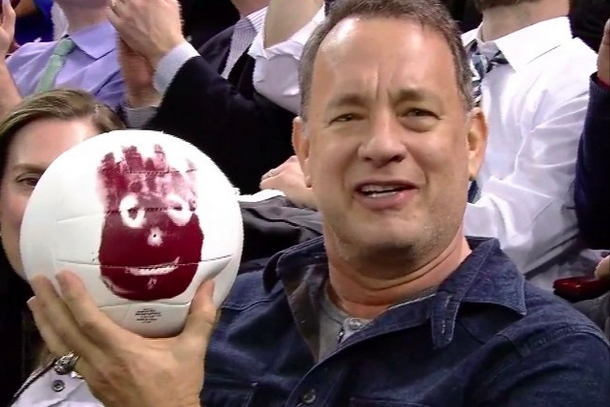 Tom Hanks was reunited with his "Cast Away" co-star Wilson at the Rangers game.

Actor Tom Hanks was at Madison Square Garden Wednesday to see the New York Rangers take on the Boston Bruins. What the film star didn't realize was that his night of watching hockey would soon turn into a reunion with an old "friend."

Hanks, 58, was spotted by the cameraman, who projected him on the big screen above the ice. As the Oscar winner waved to his cheering fans, someone tossed him a volleyball with a striking resemblance to his "Cast Away" co-star, Wilson.

In the 2000 film, Hanks starred as Chuck, a FedEx employee who found himself stranded in the South Pacific after a plane crash. Wilson, the blood-stained volleyball, was his sole companion on the island.

The Rangers' social media team posted a video of the moment via Instagram on Thursday, with the following caption: "ICYMI at the #NYR game last night, Tom Hanks and Wilson were finally reunited! #BFF."

See the touching moment below.

Hanks wasn't the only winner of the night. The Rangers went on to beat the Bruins 3-2.