Courtney Weber used one of her crops to cook 25 pasta casseroles for the residents of St. John's Hospice 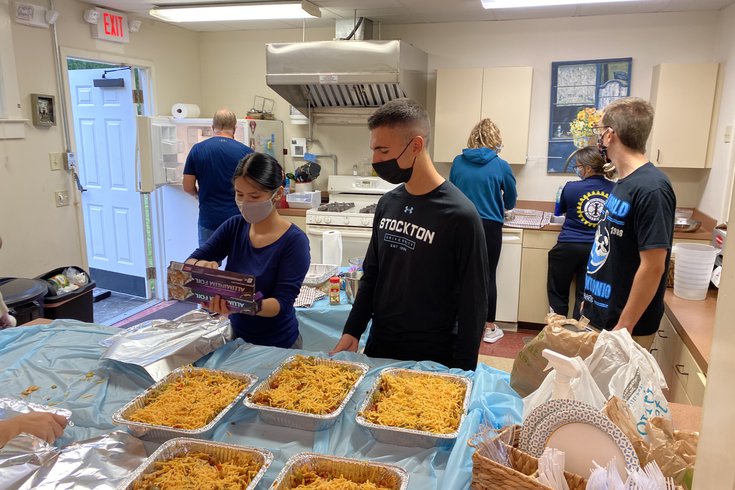 Physics students from Stockton University cooking pasta casseroles for Philadelphians in need. The tomatoes used were grown by another student for her research project.

New Jersey's countryside is already known for its great tomatoes, but one Stockton University student is trying to figure out which varieties of the beloved plant will grow best in urban community gardens.

In the process, biology major Courtney Weber and her mentor Joseph Trout – an associate professor of physics at Stockton – grew a crop they turned into 25 pasta casseroles which fed dozens of Philadelphians in need at St. John's Hospice.

They got help cooking from Trout's Physics I class and the Stockton Newman Club, a Catholic campus ministry which let the students use its kitchen.

Weber grew nine varieties of tomatoes for her study. Some were planted in Philly's Spring Garden Community Garden and the rest were grown at Stockton's farm in rural Galloway Township.

The goal was to see which varieties best handled the urban heat island effect, a phenomenon in which the density of heat-retaining surfaces like asphalt and concrete make urban areas warmer than the surrounding countryside. 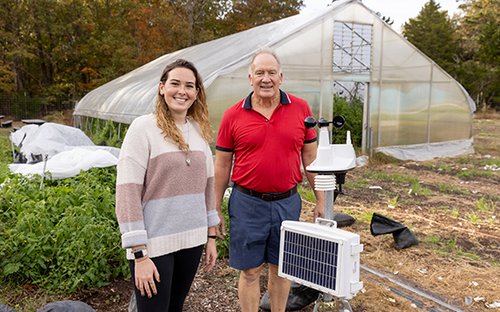 Stockton University biology student Courtney Weber and her mentor Joseph Trout, an associate professor of physics, in the school's garden in Galloway Township.

“We can’t really do anything about the urban heat effect, but maybe we can tell which tomatoes do best and when it’s best to plant,” Trout said.

He said one goal of the study was to see if planting earlier in urban gardens will offset some of the effects of the urban heat effect.

Although Weber needs to do another year of planting before she can draw any final conclusions, Trout said she tentatively found that smaller varieties of the plant grow better in urban settings while the larger kinds do better out in the country.

They picked tomatoes because they're a popular crop which can be used in many recipes.

Weber's research is being funded by Stockton's Research Experience Undergraduate grant. While she's not sure what she wants to do when she graduates, she's weighing career options in the biomedical field.

“I just really like science,” Weber said. “I want to do something medical.”