Tornadoes tear through homes, cause severe property damage in Pennsylvania and New Jersey

Officials said areas look 'like a bomb hit in some places' 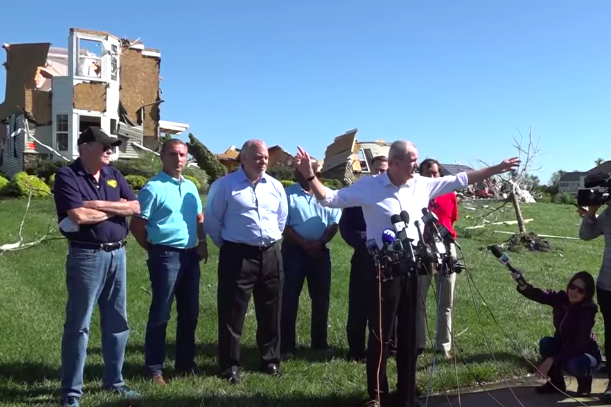 New Jersey Governor Phil Murphy visited Mullica Hill, one of the areas most impacted by the tornadoes that swept through the region Wednesday evening.

The tornado that ripped through Mullica Hill in Gloucester County, New Jersey, on Wednesday evening severely damaged homes, blew out windows and removed roofs. The entire back of one home was leveled by the devastating storm.

"An extraordinary, sadly tragic, historic 24 hours in New Jersey – there's no other way to put it," Murphy said. "This is going to take us some time to get out of, there's no question about it, and I want to just say on behalf on all of us, we're going to stay here and be by the side of the residents and the small businesses that have been impacted so severely."

Murphy declared a state of emergency for New Jersey, which will deploy resources throughout the state, effective immediately.

State Senator Steve Sweeny said the damage in Gloucester County is expansive and that trees are down across the county.

"You're seeing property damage here, but as you travel through this county, it looks like a bomb hit in some places," Sweeny said.

A home in Mullica Hill after a tornado tore through parts of NJ. You can see a tire swing, a child’s shoe, a vehicle crushed, just one of several homes damaged. @CBSPhilly pic.twitter.com/TSnTJIbf7c

No deaths or injuries were reported in Mullica Hill and everyone is accounted for, according to local authorities.

"We are with you. This won't be overnight..., it's going to be a longer road than everyone would like, but we will not relent and we will stay with it every step of the way," Murphy said.

Also in New Jersey, a tornado moved through parts of Camden County at 40 mph, and another through Burlington County, sending trees to the ground, NBC10 reported.

In Pennsylvania, the National Weather Service is checking out potential tornado damage in Chester and Montgomery counties Thursday, and in three areas of Bucks County.

Tornado warnings lasted until 7 p.m. Wednesday, urging residents to take cover from the potentially life-threatening tornados that officials said could be concealed by rainfall.

Gov. Tom Wolf signed a proclamation of disaster emergency earlier this week ahead of the storms, which allows state agencies to more easily distribute resources and respond to requests for assistance in the state.

A friend of mine just sent me pictures right after an apparent tornado came through the Oxford, PA area. Damage from tornado in pictures below. Multiple trees and power lines down with roof pieces missing. #pawx #Tornado #nws #TORNADOWARNING #wxtwitter pic.twitter.com/WFI4onoqfI

Wolf also sent emergency responders to Bucks County to help with the effects of the flooding and tornadoes Thursday.

"We have a long road ahead of us. It will take time to complete damage assessments and make assistance and resources available, but we will continue to share information about assistance as it becomes available in the days and weeks ahad," Wolf said. "Right now, my administration is continuing to do everything in our power to support local emergency officials as they begin to assess the damage this storm caused in their communities."

Murphy said tornadoes caused the most damage in South New Jersey, while flooding wreaked havoc in other regions of the state. He said he will likely be making more stops later this afternoon across the state to assess the flooding impact.

"The world is changing. These storms are coming in more frequently," Murphy said. "They're coming in with more intensity, and as it relates to our infrastructure, our resiliency, our whole mindset, the playbook that we use, we have got to leap forward and get out ahead of this."