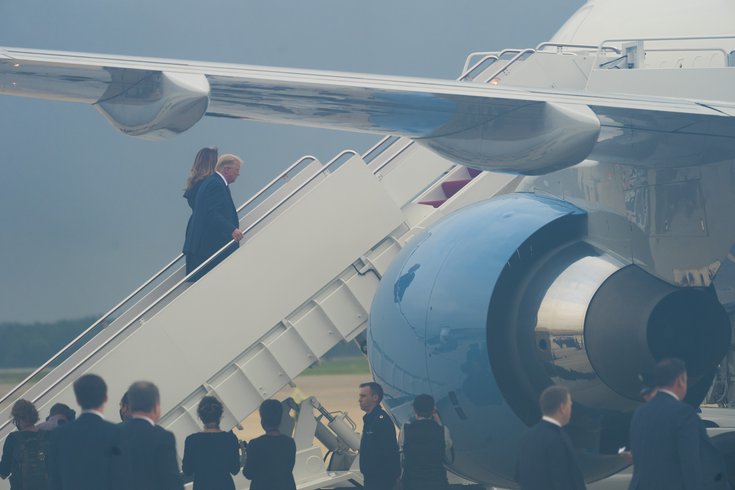 President Donald Trump and first lady Melania Trump board Air Force One at Joint Base Andrews in Washington, D.C. on their way to attend the Flight 93 memorial in Shanksville, PA on Sept. 11, 2020.

President Donald Trump and his opponent in the 2020 presidential race, Joe Biden, visited Shanksville separately on Friday in memory of the 9/11 terrorist attacks.

The memorial in Somerset County, Pennsylvania commemorates the passengers on United Airlines Flight 93, which was hijacked by four terrorists on the morning of Sept. 11, 2001, after leaving Newark International Airport. The passengers foiled the hijackers plot, which was believed to be to crash the jet into government buildings in Washington, D.C.. Instead caused the plane to go down in a field near Shanksville.

Everyone onboard died in the crash.

The president and first lady Melania Trump attended the Shanksville ceremony at 9:45 a.m. Friday. The event was streamed live due to the pandemic.

Biden first stopped in New York City, where he and Vice President Mike Pence attended the same ceremony at the World Trade Center memorial. Then the former vice president traveled to Pennsylvania a few hours later.

Watch video of the Flight 93 memorial service from Friday morning below.

Trump and other speakers honored the victims of Flight 93.

"On that September morning when America was under attack, the battle turned to the skies above this field," Trump said. "Forty brave men and women triumphed over terror and gave their lives in defense of this nation. Today we pay tribute to their sacrifice."

This year is the 19th anniversary of the 9/11 attacks. In addition to the hijacked plane that crashed near Shanksville, terrorists took control of two airliners that slammed into the the World Trade Center in New York and another that crashed into the Pentagon in Washington, D.C.

"The terrorists on Flight 93 had a fourth target in mind, it was called our nation's capital," Trump said. "They were just 20 minutes away from reaching their sinister objective. The only thing that stood between the enemy and a deadly strike at the heart of American democracy was the courage and resolve of 40 men and women."

Biden arrived at the Shanksville memorial after 12 p.m. with his wife Jill Biden. The two spoke with family of the crash victims and laid a wreath in front of the name of First Officer Leroy Homer, the co-pilot of Flight 93.

The Flight 93 memorial was constructed and opened to the public in 2011. It is managed by the National Park Service. Learn more about the memorial here.