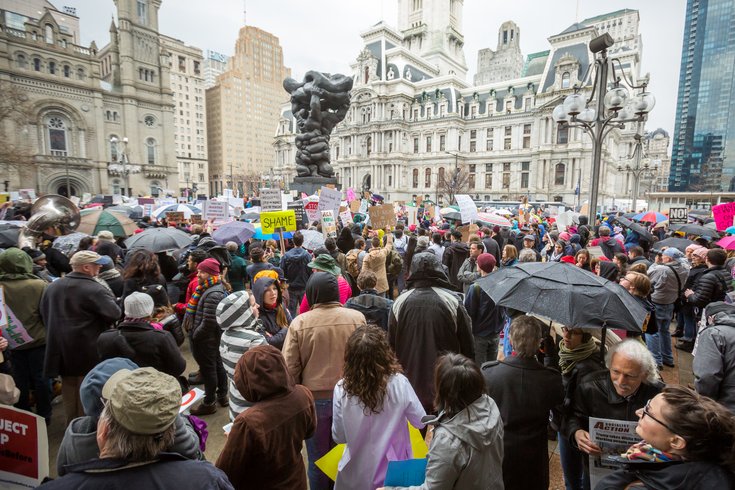 Protesters gather on Thomas Paine Plaza in Center City on January 26, 2017 before marching down East Market Street to the Loews Hotel, where President Donald Trump was meeting with congressional Republicans.

Two events this week will take a look at the impact that a repeal of the Affordable Care Act will have on Philadelphians.

City officials will host a news conference at 1 p.m. Wednesday as part of a U.S. Conference of Mayors National Day of Action, with Mayor Jim Kenney, Health Commissioner Dr. Thomas Farley and David Jones, acting commissioner of the Department of Behavioral Health, attending.

Others scheduled to be in attendance are state Rep. Dwight Evans; Councilman Kenyatta Johnson; Ralph Muller, CEO of the University of Pennsylvania Health System; and Adrianne Gunter, an ACA beneficiary.

The national event is being organized to address the serious impact losing healthcare coverage would have on millions of Americans.

The Philadelphia event will be held at the Community Health and Literacy Center, 1700 S. Broad St., in Point Breeze.

On Saturday, hundreds of people are expected to attend a Women's March Pennsylvania-organized "Philly Healthcare Rally – Defend the ACA” at 12:30 p.m. at Thomas Paine Plaza, across from City Hall.

The repeal of and proposed changes to the ACA will have a "devastating impact" on American's lives, organizers say. Saturday is the last day before Congress heads back to Washington following the winter recess.

Bob Finklestein, a Philadelphia freelance writer living with multiple sclerosis, will speak. He wrote a recent op-ed for PhillyVoice about how ACA repeal would impact his life.