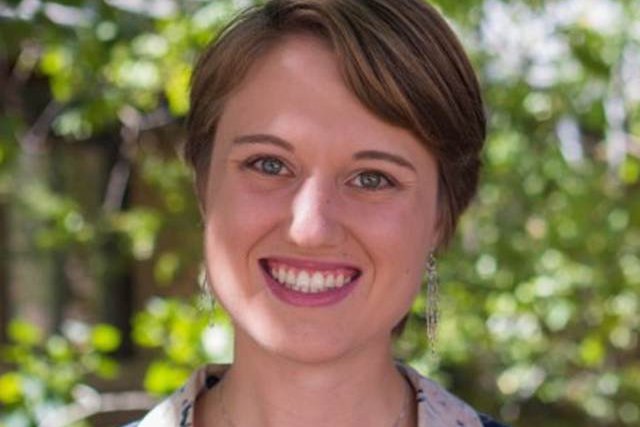 Meghan Shea, a West Chester native, is a student at Stanford University. She will pursue an master's of philosophy degree in nature, society, and environmental governance at Oxford.

Two Philadelphia-area natives are among a class of 2017 Rhodes scholars from the United States that includes students who have used data to visualize sea level rise, some who speak several languages and the son of undocumented immigrants.

Meghan M. Shea of West Chester and Spencer D. Dunleavy of Philadelphia are among the 32 American men and women chosen as scholars onSunday, the Rhodes Trust announced. The 2017 recipients were chosen from 882 applicants who were endorsed by 311 colleges and universities. Next they will pursue post-graduate studies at Oxford University. The American students will join an international group of scholars chosen from 18 jurisdictions around the world. A total of 95 scholars will be selected worldwide this year.

Scholarships cover all expenses for two or three years of study at the prestigious university in England starting next October. In some instances, they may allow funding for four years. The scholarships are worth about $68,000 per year. The first class of American Rhodes Scholars entered Oxford in 1904.

Highlights from this year's class:

Shea is a senior at Stanford University, where she is majoring in environmental systems engineering. A NOAA Hollings scholar at the Pacific Marine Environmental Laboratory, she is interested in biological oceanography, with a focus on environmental DNA and microbial source tracking.

Meghan has developed innovative methods for water filtration and oil spill bioremediation, and has worked with small-island developing states on climate change resiliency. Meghan plays in Stanford’s steel pan drumming group and has volunteered for the Monterey Bay Aquarium.

At Oxford, Meghan will pursue an M.Phil. in nature, society, and environmental governance.

A 2013 graduate of Unionville High School in Kennett Square, Chester County, she was class valedictorian. She also was co-editor of the school newspaper, captain of the drumline on the marching band and a member of the National Honor Society and Peer Tutoring.

Dunleavy is in his senior year at Harvard College, where he concentrates in chemistry, with psychology as a secondary field. Spencer intends to pursue a career in medicine, with a commitment to teaching and primary care; he attributes this directly to his own family’s experience dealing with chronic illnesses.

As Harvard’s Red Cross director, he has taught CPR, first aid, and life support to more than one thousand people. He founded a nonprofit organization, Raise Uganda Now, that has raised more than $30,000 for an orphanage. He is an avid intramural sports participant.

At Oxford, he plans to read for an M.Sc. in education, focusing on research design and methodology, and an M.Sc. by research in Primary Health Care.

Spencer, who grew in the Holmesburg section of the city, is a 2013 graduate of Julia R. Masterman High School in Philadelphia.

A senior at the University of South Carolina lists his interests as three-dimensional mapping and data visualizations related to sea level rise, aquatic habitat and underwater archaeology.

Jory M. Fleming, of Columbia, South Carolina, is double-majoring in geography and marine science. He has worked on funded research projects for NOAA, the National Park Service and National Geographic. Fleming will pursue a master of philosophy degree in geography and the environment.

BRIDGING THE PAST AND PRESENT

Nancy Ko, a senior at Harvard University, plans to do her graduate work in modern Middle Eastern studies and ultimately wants to become a professor of Jewish history. She traces her interest to growing up near a Jewish community in Brooklyn.

Studying history is more than just learning about what happened, she says. It builds bridges between the past and present.

The daughter of Korean immigrants is proficient in both Hebrew and Arabic.

Oscar De Los Santos was born the son of immigrants from Mexico who at the time were in the U.S. illegally. In 2015, he was one of the top 20 graduates from the University of Southern California.

Born and raised in Los Angeles, De Los Santos now lives in the Phoenix suburb of Laveen and is a lobbyist and manager of public policy for the Association of Arizona Food Banks.

De Los Santos told The Associated Press via email that he's grateful for the scholarship but disappointed he is the only Latino selected this year.

He has a bachelor's degree in political science. At Oxford, he plans pursue masters' in public policy and theology, with a focus on Christian ethics.

STUDYING LAW AROUND THE WORLD

Joshua Pickar, of Lexington, Massachusetts, is the only native New Englander among this year's winners. He graduated from George Washington University in only two years with a double major in international affairs and security policy. He's now in his final year at the University of Chicago Law School.

Pickar speaks several languages and plans a career in international law and policymaking. He learned he was among the winners on Saturday after he and other finalists were interviewed for the scholarships.

"They called my name first and I was shocked," Pickar, 22, said Sunday. "I'm thrilled, and I'm really excited to go to Oxford."

Pickar speaks Russian, French and Spanish, and is learning German, Italian and Arabic. His interest in languages dates back to middle school, when he started taking Spanish classes and took a trip to Costa Rica after eighth grade.

"I found it to be really exciting," he said of speaking to people in other countries in their native languages. "Now I see it as a way to enhance your understanding of policy and law around the world."

Pickar said he's interested in the ramifications of Britain leaving the European Union and is thinking of pursuing a clerkship at the International Court of Justice in the Netherlands.

While in college, Pickar successfully helped advocate for an Iraqi refugee's relocation to the U.S. after the refugee had been beaten by his family and exiled because of his sexual orientation. Pickar also helped in efforts to gain American citizenship for a deaf and mute Honduran who was tormented because of his disabilities.

Hannah Carrese says the current definition of a refugee is outdated. The recent Yale University graduate says international agreements apply to people fleeing violence or persecution, and not mass migrations from places like Syria, Honduras, El Salvador and North Africa.

Carrese worked with refugees from Bhutan while she was in high school in Colorado Springs, Colorado, and went to Mexico to work with refugees fleeing violence in Central America.

At Oxford, Carrese says, she plans to look for ways to provide aid so people won't have to flee their homes and find new policies for countries to deal with mass influxes of refugees.

A college graduate who grew up in a Tibetan Buddhist community in California plans to study the faith in more depth at Oxford University after he she won a Rhodes Scholarship from the venerable British institution.

Pema McLaughlin, 22, a graduate of Reed College in Portland, says she plans to pursue a two-year master's degree in Buddhist Studies.

"I finished my degree in religious studies at Reed this past spring, and that gave me a realty broad base to consider the role of religion in modern society," McLaughlin said. "My (college) thesis focused on Buddhism in America."

At Oxford, she wants to student Sanskrit and the Tibetan language "to extend my study of religion across cultures back into the past," McLaughlin said.

She grew up in a Tibetan Buddhist community in Junction City, California. Her mother was a longtime administrator there, McLaughlin said.

McLaughlin says she plans to study for a doctorate in religious studies once she completes her master's degree at Oxford.

A safety for the Texas Christian University football team overcame poverty, homelessness and abuse founded a youth outreach organization on his way to becoming a scholar.

Caylin L. Moore, of the Los Angeles suburb of Carson, is a senior at TCU studying economics. His father was sentenced to life in prison on a murder charge, the Rhodes Trust said.

Moore founded S.P.A.R.K., a youth outreach organization of student-athletes who encourage disadvantaged children to attend college. He also is as a volunteer for the Children's Defense Fund. He will pursue a master's of public policy at Oxford.

A 23-year-old from Tacoma, Washington, who plans to combine his knowledge of genetics and philosophy to help guide tough ethical decisions as advancing technologies make designing humans possible was selected as a Rhodes Scholar on Sunday.

Anthony W. L. "Wilder" Wohns says the pitfalls of human genetic engineering are many and varied and his studies at Oxford University will prepare him to face those challenges.

Wohns graduated from Harvard University in 2016 where he studied human evolutionary biology and computer science.

He's currently at the University of Cambridge studying for a master of arts in biological anthropology.

As a Rhodes Scholar, he'll pursue post-graduate studies at Oxford University in 2017. He plans to obtain a second bachelor's degree in computer science and philosophy.