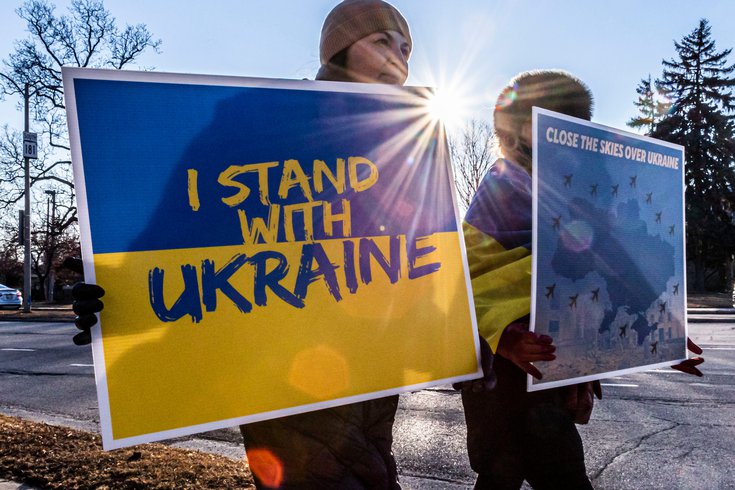 Americans were quick to voice their outrage at Russia's invasion of Ukraine and rushed to support humanitarian efforts. Above, demonstrators march through Wauwatosa, Wisconsin, on March 9, 2022.

I shared in the horror of much of the world as I witnessed the largest mobilization of troops on the European continent since World War II as Russia invaded Ukraine. For me, as a committed pacifist and follower of Jesus, the Prince of Peace, armed conflict – let alone invading a sovereign country to annex it or to install a puppet government – is immoral and unconscionable. It is worthy of repudiation and condemnation.

For many Americans though, the opposition to Russia's invasion isn't rooted in the immorality of war or imperialism but rather opposition to Russia and support of the West. Unsurprisingly, Putin's poorly calculated war has resulted in more Western unity and the possibility of NATO growing.

What this showcases is that opposition here is more political than ethical. Our outrage against war is too often rooted in who is doing the invading and where they are invading.

Former Secretary of State Condoleezza Rice displayed this blatant hypocrisy when she declared invading a sovereign nation violated international law and order. My jaw dropped when I heard a key proponent and apologist for the U.S. wars in Iraq and Afghanistan claiming that such invasions were unlawful. I was stunned, but also deeply saddened, both by the American exceptionalism of her claim and by the Western and white supremacy in it.

And this kind of incident is not isolated to FOX News broadcasts or an architect of the Global War on Terror.

CBS News correspondent Charlie D'Agata made revealing comparisons of Ukraine to Iraq and Afghanistan, describing Kyiv as a "relatively civilized," "relatively European" city, whereas Iraq and Afghanistan are places that have had "conflict raging for decades." D'Agata apologized, but his comment is emblematic of deeply rooted racism and Western bias and how that influences perceptions of non-white countries. Think of it as akin to saying violence in cities is less concerning than violence in the suburbs because violence is "the norm" in cities.

These comparisons break my heart, as an Arab-American, the son of Egyptian immigrants. Why is the world united in its opposition to the invasion of a white country? And why did so many Americans find unity in their support of the invasions of Iraq and Afghanistan, especially at the outset of those conflicts?

There are many reasons for this, but the most personal to me is that brown nations are seen as less human, less worthy of dignity, and less deserving of peace. Further, this line of thinking implies that brown people are less capable of self-determination and need to be rescued by white saviors. It is dehumanizing, like the world is saying, we are not worthy of life, and we are not capable of our own liberation.

These poorly conceived wars – fought on false pretenses in the case of Iraq – did wane in popularity over the decades. But, it wasn't how the U.S. ripped the countries apart that spurred Americans' disdain; most Americans just didn't want American soldiers making those sacrifices any longer.

I am grateful for their opposition, but it still did not have to do with my dignity, with our dignity. In fact, President Biden's haphazard withdrawal from Afghanistan showcased as much, as Afghans were left defenseless. Even more sickening is how many more Americans say they would support bringing Ukrainian refugees to the U.S – 74% were in favor in one recent poll. Compare that to the portion of Americans who supported allowing Afghan refugees, other than those who helped the U.S. government, seek haven from the Taliban in this country. An Associated Press poll published in October found that only 42% of people were in favor of allowing that category of refugees come to the United States, even after they had passed security checks.

Not only is this hypocritical, it is racist.

The dehumanization of brown people wasn't limited to those living in Iraq or Afghanistan. I felt it at home, too. I grew up in a predominantly white town in exurban Pennsylvania, and witnessed the attacks on the World Trade Center and Pentagon as a sophomore in high school. The wars with Afghanistan and Iraq that followed profiled me and my family as enemies of the United States.

We were forced to assimilate, to wear American flag pins, to demonstrate our patriotism conspicuously to try to evade racialized harassment. I remember the names classmates called me; one of them even likened my appearance to that of Osama bin Laden. The racism I experienced is exactly why it was so easy to justify the invasions at the time – the people the U.S. was bombing didn't look like white Americans.

The vile propaganda that furthered the racism I experienced galvanized support for the wars. And it is not dissimilar to the propaganda that Putin is selling to support his own unlawful wars. In both cases, the warring nations are creating an enemy to convince their own populations to support an immoral invasion. In the case of the U.S., much of that enemy was already created by Western media, TV and cinema. Brown people, specifically Arabs, have been the bad guys for a long time in our media.

In Ukraine, Putin is commanding Russian soldiers to kill and fight people that look like them, that sometimes speak the same language. The kinship that Russians and Ukrainians share make the actions of the conflict apparently evil. There is nothing wrong with that on its face. It is clearly wrong to kill family. But I long for a world where people who look like me are seen as siblings in that family, where it is equally unconscionable to invade our countries. I long for a world where we are bold in our opposition to armed conflict, and not only when it serves our national interests, or when its victims look like us.

Jonny Rashid has been pastor of Circle of Hope in Philadelphia for more than 10 years. He is an abolitionist and a housing activist. He is an avid cook, who blogs at jonnyrashid.com and hosts Circle of Hope's "Resist and Restore" podcast. He studied journalism, education and history at Temple University and completed his masters of divinity at Palmer Theological Seminary. His book "Jesus Takes A Side" comes out May 31.