St. Jude's Children's Research Hospital is putting out the call for volunteers as over 1 million Ukrainian refugees have left the country 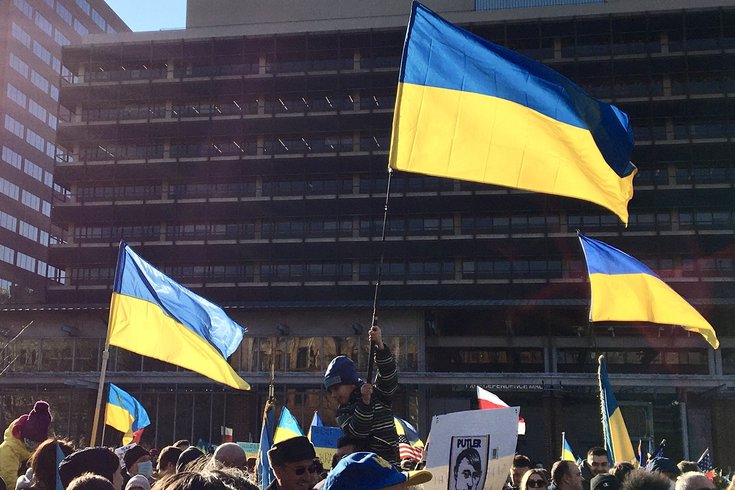 St. Jude's Children's Research Hospital is looking for Ukrainian-speaking volunteers in Philly who can help with pediatric cancer patients being evacuated to the U.S. The photo was taken during a pro-Ukraine rally in Philadelphia on Sunday, Feb. 27, 2022.

Ukrainian language translators are needed in Philly to help pediatric cancer patients being evacuated from the war zone to the U.S. by the St. Jude's Children's Research Hospital.

The hospital is looking for physicians who speak Ukrainian to help translate medical records into English. Volunteers would be able to do this on a flexible schedule with no specific shifts.

St. Jude's is also looking for volunteers with a biomedical background who are fluent in English and can read languages written in the Cyrillic alphabet, which include Russian and Ukrainian.

These translators will be asked to cover one or two six-hour shifts per week entering new patient data into the patient registry and facilitating communication more generally.

Marcin Wlodarski, a doctor at the St. Jude's campus in Memphis focused in part on blood cancers, first put out the call for volunteers on Twitter on Thursday.


"Thanks for the overwhelming response," he tweeted a day later.

Word spread on the Ukraine subreddit on Friday and by Saturday there were tweets going out looking specifically for volunteers in Philly.


Those interested in volunteering are asked to send an email to stjude4ukraine@stjude.org.

In the days immediately after the Russian invasion, there were reports of pediatric cancer patients sheltering in the basements of hospitals. Many have also had their treatment disrupted, as only some medical supplies are available.

​​"These children suffer more because they need to stay alive to fight with the cancer," Lesia Lysytsia, a doctor at a pediatric hospital in Kyiv, told NBC News. "This fight cannot wait."

Although it was risky, hospitals began evacuating these cancer patients out of Kyiv with the hopes of first getting them to Lviv, the largest city in Western Ukraine, and then to Poland or European nations.

But on Tuesday there were reports that 11 pediatric cancer patients were stranded in the basement of a children's hospital in Chernihiv, which is just a few miles from Ukraine's northern border with Russia, while the city was under siege.

“We don’t know how much time we have,” Serhiy Zosimenko, a charity worker supporting the 11 patients and their doctors and parents, told the Guardian. “We actually don’t know how to survive here, It’s unreal. We don’t have any more resources.”

But some kids have already been evacuated, and more will be soon.

St. Jude's was founded in 1962 by actor Danny Thomas and is primarily focused on pediatric cancer. Although the hospital is based out of Tennessee, they work with affiliates across the country. Donations can be made on the hospital's website.

Those looking to make a donation to doctors and patients who remain in Europe can contribute to the Ukrainian childhood cancer emergency fund, which is being run by an organization called Childhood Cancer International Europe. A donation page is available on their website.

At this point, over 1 million Ukrainian refugees have left their homeland amid the fighting.