A gallon of gas is going for $4.08 on average in the Keystone State and $4.15 in Philly region, but prices are somewhat lower in South Jersey 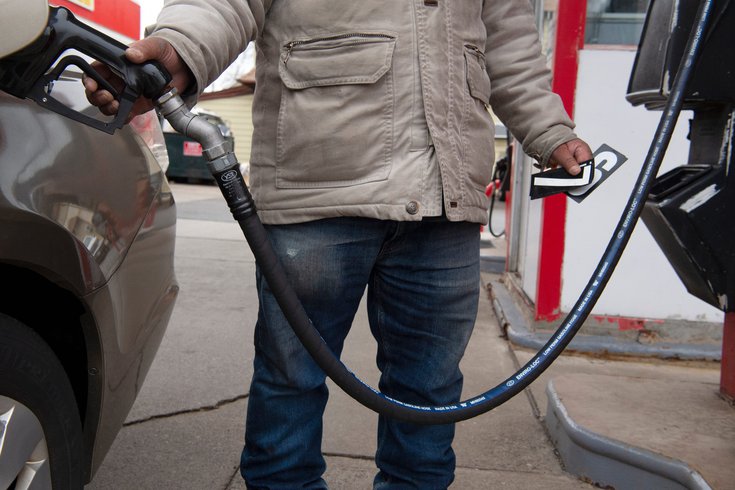 A gas station attendant pumps fuel in Fair Lawn, New Jersey. Gas prices in Pennsylvania broke an all-time record on Saturday, but they're lower in South Jersey, where there's a smaller gas tax.

Pennsylvania clocked its highest average gas price ever recorded Saturday after fuel costs in much of the Philadelphia region soared past $4 per gallon this week and continued to rise into the weekend.

The regional spike in prices mirrored a global one which has come to the fore in recent days due to Russia's invasion of Ukraine.

On average, a gallon of gas went for $4.08 in Pennsylvania on Saturday according to the American Automobile Association, which is the highest it's ever been in the state. That's 16 cents higher than the national average and up from just $3.75 a week ago and $3.60 a month ago.

Prices are somewhat lower in South Jersey, in part because of its relatively low gas tax rate.

In Philly's South Jersey suburbs, a gallon of gas currently costs $3.93 on average. That's just one cent above the national average, but prices are still up from $3.58 a week ago and $3.41 a month ago.

Camden County currently has the best gas prices in New Jersey. There, a gallon is going for $3.92 on average.

Even though the U.S. only imports 4% of its gas from Russia, the nation does provide 12% of the world's gas, so the disruption is causing prices to increase globally.

Although the Biden administration has been cautious about sanctions on the Russian energy sector given the impact they can have on American consumers, a bi-partisan coalition of lawmakers introduced legislation that would ban oil imports from the country on Thursday.

Rep. Brian Fitzpatrick, a Republican from Bucks County, will be introducing the bill with Rep. Josh Gottheimer, a Democrat from Bergen County.

The experts at Kiplinger don't believe prices will be coming down any time soon, barring a sudden resolution of the conflict in Ukraine. Gas prices usually surge going into the spring, when there are more drivers on the road, so the timing is not good.

Additionally, regardless of American sanctions, Russian oil exports are dwindling as the nation focuses on fighting the war in Ukraine. This will further limit supply and drive up prices.

As prices rise, consumers are looking for ways to save money on gas. The American Association of Retired People has compiled a few tips.

The simplest way to save money is to just drive less. One easy way to do that is to run errands while commuting rather than as a separate trip.

Driving techniques can also have an impact on fuel mileage. AARP recommends driving slow and smooth rather than racing to red lights and stomping on the brake, which uses more gas.

Another way to save is to stay up to date with your car's maintenance schedule. In particular, flat tires can sap fuel mileage.

It's also a good idea to shop around if possible when buying fuel. Gas tends to be cheaper at local stations than on the highway and certain outlets like Costco and BJ's offer reduced prices.

There are also apps available, like GasBuddy, which can help drivers find the cheapest fuel in their area.

Although New Jersey is faring better than any of its neighbors and much better than locales on the West Coast – like California, where a gallon is going over $5 on average – some politicians in the state are getting antsy about the high prices.

Earlier this week, a bill was introduced that would make self service an option for drivers statewide as a way to bring down prices.

New Jersey is currently the only state where gas stations are required to provide a fuel attendant for all drivers. The rule has traditionally been lauded as a way to create jobs in the state, but it also contributes to higher operating costs for gas stations which often get passed on to consumers.