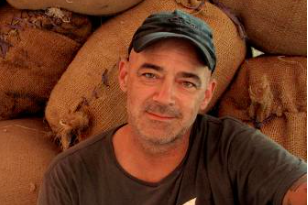 Todd Carmichael is the co-founder of the Philadelphia-based La Colombe coffee roasters and cafes.

Philadelphia's presiding coffee magnate and CEO of La Colombe Torrefaction, Todd Carmichael, is gearing up for a successor to his Travel Channel show 'Dangerous Grounds,' which saw the thrill-seeking entrepreneur hopping continents in search of the world's finest joe.

Carmichael's journeys on 'Dangerous Grounds' often landed him in dicey situations with locals who controlled prime harvests, but the new show, 'Uncommon Grounds,' will focus more on cultural exploration of the countries he visits, the Philadelphia Business Journal reports.

"I’m excited to combine my love of coffee and culture in my new series, ‘Uncommon Grounds,’” Carmichael said. “Coffee has enriched my life in countless ways, from developing solid friendships and exploring the world to building my successful company, La Colombe.”

Destinations included in 'Uncommon Grounds' will include Paris, Lusaka, Istanbul, and Havana, Cuba, where Carmichael will examine exactly how vital coffee is to each society. (Meursault, from Albert Camus' 'The Stranger,' famously asked, "Should I kill myself, or have a cup of coffee?").

A Travel Channel spokesman confirmed that the new series will mark the end of 'Dangerous Grounds.'

At La Colombe, meanwhile, Carmichael and company's latest innovation is the Draft Latte, a rebuild of the ice latte from the ground up poured straight from a keg. The Draft Latte is currently on tap at La Colombe's Fishtown, Independence Mall, NoHo, and Hudson Square locations.

'Uncommon Grounds' debuts on The Travel Channel September 14 at 11 p.m.