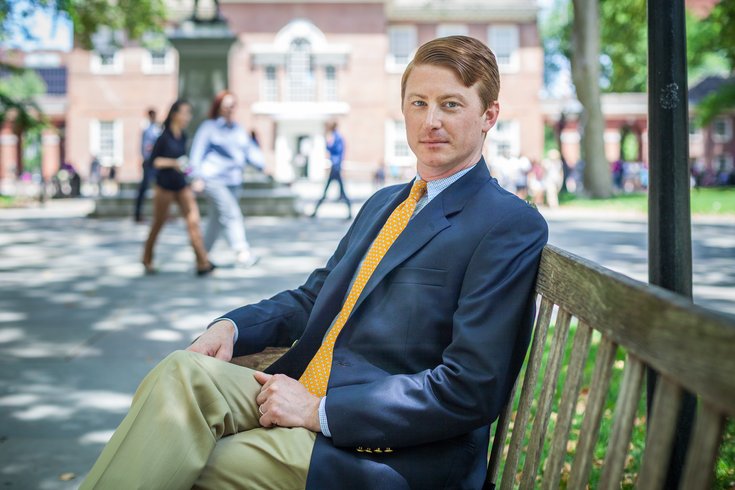 Michael Stevko, 35, a U.S. Navy veteran with degrees from Penn and Georgetown, is seeking a management position in the Philadelphia area to utilize his skills to the fullest. He has been searching for employment for three years.

Michael Stevko hails from a family with strong military roots.

Each of his grandfathers served in World War II. One was a Navy belly-gunner stationed in North Africa. The other stormed the beaches of Normandy with the U.S. Army, later fighting in the Battle of the Bulge. An uncle served in the Persian Gulf War.

So, Stevko said it felt natural to enlist in the Navy as a 17-year-old, an age that required written approval from his parents. Within a couple years, he was being trusted to process top secret messages at Misawa Air Base in Japan.

"The Navy's core values are honor, courage and commitment," Stevko said. "You take those with you wherever you go. If you go to your next job, that's what your foundation is. That's what they teach you."

Stevko, 35, of Philadelphia, is among thousands of under- or unemployed veterans looking for work. Equipped with a master's degree in Public Policy Management from Georgetown University, Stevko is hoping to land an administrative management position at a Philadelphia-area employer ready to take advantage of his varied administrative and political experiences.

But his search has lasted about three years.

"I didn't follow the traditional path," said Stevko, who grew up in Ansonia, Connecticut. "I did military first and then I went all over the place. (Employers) don't quite know what to do with me. I think that's been a little bit of my difficulty. You have people who might have less experience, but they have a clearer cut path. It's simpler for employers."

Upon leaving the Navy in 2002, Stevko earned a political science degree at the University of Pennsylvania, where he also met his wife, Elizabeth. He held several administrative positions until 2008, including jobs at the Wharton School of Business and the Philadelphia Stock Exchange.

He then enrolled at Georgetown, where he completed internships with Sen. Arlen Specter's office and the World Affairs Council of Philadelphia. But he graduated in 2009, right as the economy tanked.

His wife accepted a finance job in Chicago and the couple moved to the Windy City. But Stevko struggled to find longterm employment, serving as a communications director for Republican Isaac Hayes' Congressional campaign.

Leaving Elizabeth in Chicago, Stevko returned to Washington to find work in the political realm. He came away with another internship, this time for a Georgia congressman, and a fellowship with the James J. Carey Foundation. But he couldn't find full-time work.

Both he and Elizabeth returned to Philadelphia in 2012. Stevko found work at Penn Medicine, working in its radiology department.

"This is something you do at the beginning of your career," Stevko said. "I had a lot of flexibility, but this is stuff I'd done 10 years ago. It's a job, so you have to take it."

Last September, Stevko accepted an offer from the Federal Reserve Bank of Philadelphia, where he handles administrative projects in the information security department. But the job is temporary and not quite in his field.

Throughout his job search, Stevko has sought assistance from the Veterans Multi-Service Center, a nonprofit that provides a wide array of veteran services, including employment and training services. Each year, the center trains more than 200 veterans and places more than 300 in local employment opportunities.

Director of Development Debby Derricks has high praise for Stevko, whom she has personally assisted.

"I think he's a highly talented and qualified candidate," Derricks said. "I think any employer who is seeking to bring on board someone with a diverse background – he would be an ideal candidate. I know that he's been looking for a long time. He's currently employed, but is looking for a position that gives him an opportunity to expand on his experience and grow."

Ideally, Stevko said he seeks a management position as an associate or assistant director, adding that his organizational, writing and people skills could aid a number of companies or universities within the Philadelphia region. He has broad political and administrative experiences dating back to his service in the Navy.

"I think that adds strength to whatever position I get," Stevko said. "You have someone who can handle himself around higher-ranking folks and write a little bit. Obviously, the service background is always a benefit. When you have vets, it adds a little something different."

The Navy has a tendency to make its members more disciplined and organized, Stevko said. He became so refined that his room was featured in All Hands Magazine, the Navy's official publication.

"You get the sense of being part of something greater than yourself," Stevko said of his lessons as a yeoman in the Navy. "It's not your thing. You're there with a team. You're there with a mission. ... It just makes you a little more conscious of yourself and how you behave, because it's a reflection on your country."

Now, Stevko is prepared to bring the skills and mindset he first developed in the Navy to a new employment opportunity.

Have a job opportunity for today's hero? Please contact the Veterans Multi-Service Center at 215-923-2600.