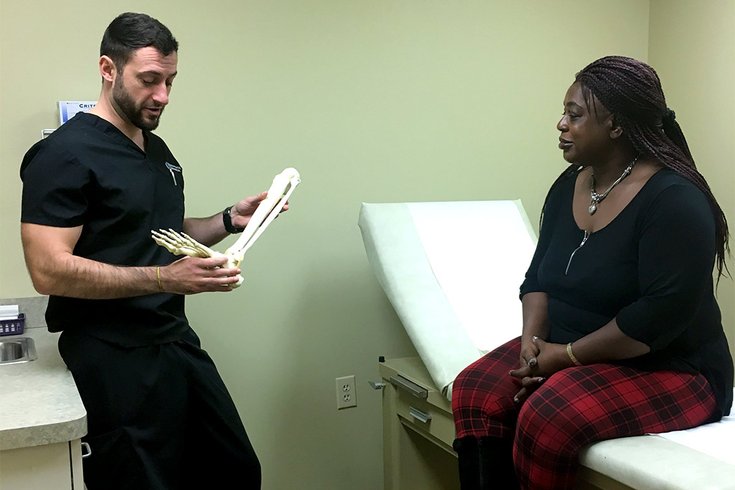 Orchid Jackson, right, of Millville, Cumberland County, chats with her specialist, Dr. Matthew Brant, of Reconstructive Orthopedics in Vineland. Jackson had to lose 90 pounds to qualify for an ankle replacement surgery two years ago. The procedure's been around for several years, but recently gained popularity among younger, more active patients to address arthritis pain.

Orchid Jackson broke her ankle back in the 1980s. She still feels the effects two decades later in the form of post-traumatic arthritis.

Jackson, 55, of Millville, Cumberland County, could still walk, but her mobility was limited and she sometimes experienced pain. Or, as she put it, "I had my good days and my bad days."

Two years ago, Jackson underwent a total ankle replacement, a burgeoning procedure that has emerged as an alternative to ankle fusion, a long-held remedy for severe arthritis.

But before she could have the surgery, Jackson needed to lose weight. On a bad ankle, no less.

Patients who are too heavy can place excessive demands on the replaced ankle, in which a plastic-and-metal joint has been inserted in place of damaged bones.

So, Jackson hit the gym.

In the months leading to her November 2016 surgery, Jackson put herself through a workout regimen that included hip crunches, abdominal workouts, weight lifting and bicycle work.

"When (Brant) gave me a date, that's when I started pushing things a little harder," Jackson said.

"I still work out," Jackson said. "I'll still be at the gym. I like lifting weights and showing off. It's alright. I feel better when I'm in the gym anyway. The more I work out, the better I feel."

Two years after her surgery, Jackson had only praise for a procedure that is becoming more and more popular among younger patients. Her recovery was relatively short and her ankle is holding up well.

She said she's even back to dancing – though she's still learning to walk in heels again.

"It's a lot better," Jackson said. "I still get around. I don't use a cane, no crutches, no nothing. I'm independent."

Across the United States, total ankle replacements were expected to reach nearly 10,000 procedures in 2017, according to The Wall Street Journal. That's double the total from 2011.

"It's becoming more of a trend," Brant said. "Some people would say it's moving toward the gold standard compared to a fusion. It's always going to be a debate."

For years, ankle fusions have stood as the standard procedure to relieve arthritis pain, particularly for younger adults who maintained more active lifestyles. Surgeons roughen the ends of damaged bones and attach them with metal plates and screws. The damaged bones fuse together into one bone during the recovery process. But doing so reduces the ankle's motion, possibly causing nearby joints to move more, a factor that increases the risk of developing arthritis in those joints.

Total ankle replacements help patients retain a more natural gait and there's a lower chance of developing arthritis in nearby joints. And patients get back to weight-bearing faster than ankle fusions.

But the replacement components can loosen, eventually requiring additional surgeries. By comparison, ankle fusions are expected to last a lifetime.

Still, Brant said many patients don't yet realize that total ankle replacements are an option. Some who have battled arthritis remember being told years ago that they would eventually need an ankle fusion, he said.

That includes Jackson, who is happy she opted for replacement, not fusion.

"I'm doing real good," she said. "Everything is normal."