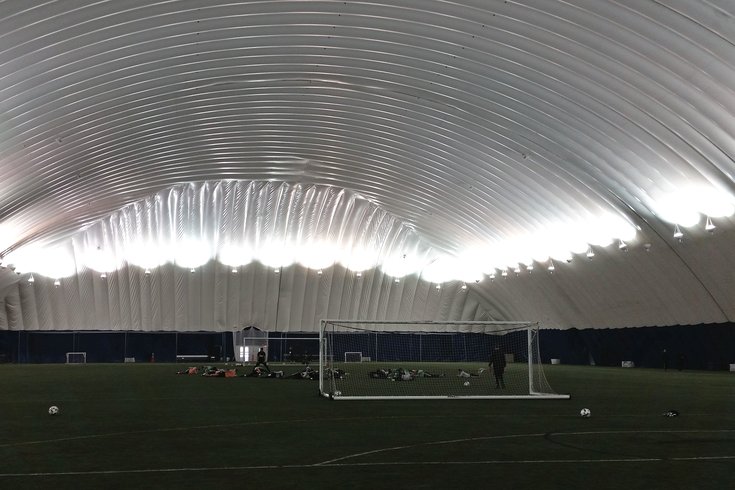 The Union practiced inside the Penn Park bubble on a cold, windy Monday morning.

A number of players were missing from Union training at the University of Pennsylvania on Monday morning.

Among them was striker Jay Simpson, who is currently moving his family from London to Philadelphia.

Bosnian midfielder Haris Medunjanin just arrived in town and spent his Monday in Chester, touring team facilities and receiving a physical. He'll travel to Florida with the rest of the team on Tuesday morning.

Oguchi Onyewu, Chris Pontius, Charlie Davies, and Eric Ayuk also were not on hand, but the biggest absence was center back Josh Yaro, who stood to the side with a sling on his surgically repaired right shoulder.

The second-year defender will miss three to four months to start the season.

"It's difficult because he came in really fit, really sharp in training," said head coach Jim Curtin. "Probably a week and a half ago, he dislocated (his shoulder) again in a non-contact (situation), fell down during a two-versus-one exercise. He just fell in the middle of the field. To be honest, I didn't even realize that he dislocated it. He stepped out of training and we kept going for awhile.

"Then we got word that it had popped out on him again. It's the same (injury) that happened in the Orlando game (last May). He's had surgery on the other shoulder, and that one used to pop out. He had the surgery to make it strong. There were two ways of thinking; it's something now where we can strengthen the muscles and risk that it doesn't pop out again. Each time it pops out you're losing two to four weeks of recovery.

"We made the decision as the group, with the doctors, with Josh, just to get it taken care of in terms of getting it all fully connected again so that it doesn't pop out. It's disappointing. Josh is a starter when he's healthy."

Curtin described Yaro's absence as a "speed loss" on the backline. His potential backup is Onyewu, the 34 year old veteran who has never been blessed with pace. Ken Tribbett, who started 19 games in 2016, is similarly a larger, aerially dominant center back.

"There were discussions of surgery at the end of the season," Curtin explaind. "There were also discussions of surgery at the time he did it. A lot of variables go into it. You get the best opinions you can, based on what the pictures show and what Josh feels that he can tolerate pain-wise. For it to happen again now, you kind of want to take care of it and hope it doesn't happen again. It's not to say that he couldn't dislocate his other shoulder at some point, but (surgery) is the most finite, or definitive way to (fix it).

"Hopefully now it's in the past and we can just let him train fully."

Fafa Picault played as a center forward in the second half of last week's 1-0 loss to Chicago.

The speedy 25 year old has experience in a number of different roles, and he's a forward/winger hybrid who brings a lot of variety to the attack. Curtin described Picault as a guy who might be most effective playing on the left and cutting inside on his right foot.

Picault is open to anything.

"It just depends on the game and who's around," the forward said of his preferred position. "I think the important thing is that I can just find gaps and get behind defenders, whether it's dribbling or having my midfielders get me the ball over the top, as long as I can get behind them. You start reading the game. If it's called for me to drop up top, I can do that. If it's called for me to slide off to the left, I can do that, to cut in and shoot. If I need to play off the right, I can do that as well and get balls into the strikers. If I have to play behind the striker, I can do that as well, like a false 9 where I'm coming into the ball then going behind. Anywhere in the attack, wherever is needed I'm able to play. I've played all of the positions, so I'm comfortable.

The highly-rated Akron midfielder did not enter the 2017 MLS SuperDraft because he was a homegrown player going through contract negotiations with the Red Bulls. When a deal could not be reached, New York traded his rights to Philadelphia for a 2018 second-round draft pick.

Most college kids dream of being selected on draft day, but Najem's experience revolved around business talks involving the team that currently held his rights.

"I've been through it before," Najem told reporters after training. "I know this is a business and everything around it is going to be complicated. It was a little unsettling. I didn't really know what was going on, but I'm sure guys in the draft have that same type of unsettling feeling. Everything happens for a reason. I was patient and I'm thankful to the Philadelphia Union for taking a chance on me."

Najem will keep his homegrown status despite the trade. He bagged 33 goals and 29 assists in four years for the Zips.