For the first time, the Philadelphia Union have depth at all positions 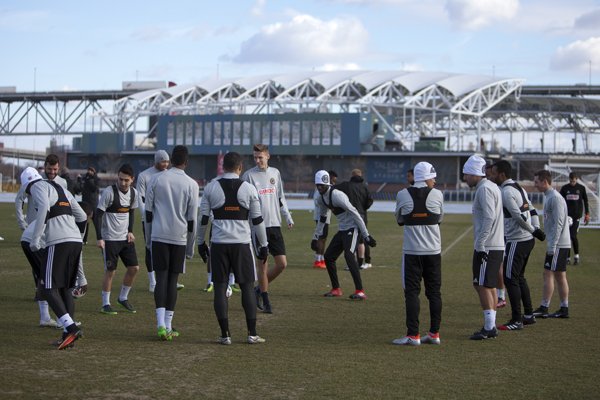 In Earnie Stewart's second season, the Union look to be two-deep at every single position.

Long gone are the days of Union managers cobbling together a gameday 18 from incomplete and poorly built rosters.

We're heading into 2017 with two left-footed left backs, two right-footed right backs, and a balanced squad that looks to be two-deep at every single position.

Prior regimes historically struggled in the personnel department.

Think back to the spring of 2014, when the Union defense featured Sheanon Williams, Aaron Wheeler, Amobi Okugo, and Ray Gaddis. That's two right backs, a striker, and a defender. Only one of the four was playing in his preferred position.

That lack of roster foresight trickled down to the bench, which was often bereft of a true forward or third center back. Later that year, in the U.S. Open Cup final, Seattle pulled Obafemi Martins, Marco Pappa, and Gonzalo Pineda off the bench. The Union called on Pedro Ribeiro, a rookie midfielder, to play as a center forward. Winger Danny Cruz and defensive midfielder Mike Lahoud were the final two subs.

Depth made the difference in that game, which Seattle claimed in extra time at PPL Park.

Now, as we head into the 2017 season opener, here's what a full strength Union eleven looks like: 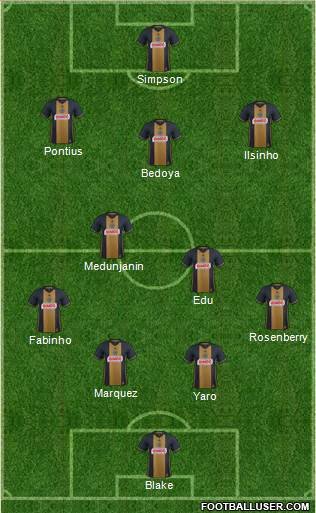 That's a solid starting eleven. You've got the same back five playing together unless Giliano Wijnaldum does well enough in preseason to claim the starting left back job. You've also got everybody on the backline playing on their preferred foot.

Now take a look at the Union "second team": 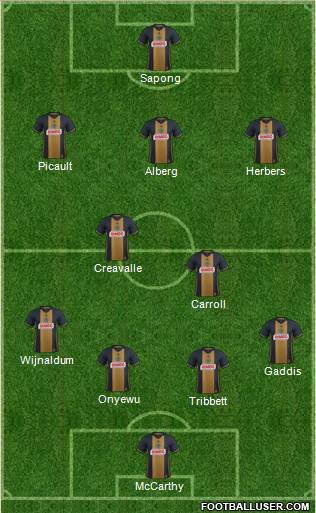 Pretty good, right? This team would probably beat the 2012 or 2010 Union first teams.

You are two-deep at fullback, two-deep at center back, and even three-deep in some areas like center forward and right wing. The only guy you can't replace effectively looks to be Medunjanin since his skill-set is unique compared to the rest of the roster.

Beyond these 22 players, you still have guys like Charlie Davies, Derrick Jones, Auston Trusty, Eric Ayuk and Marcus Epps available. Take that group and combine it with Bethlehem Steel and you've got a pretty good "third team" as well.

Beyond the starting lineup

Let's say the Union roll out that first team I mentioned above.

If you have an injury, a suspension, or a combination of those, the bench could also look like this:

Even here, you've got three quality attacking pieces, a center back, a fullback who can play on both sides, and a young central midfielder.

I keep physical copies of the team sheets from every game, so I decided to look through some years past to compare gameday depth to 2017 projections. 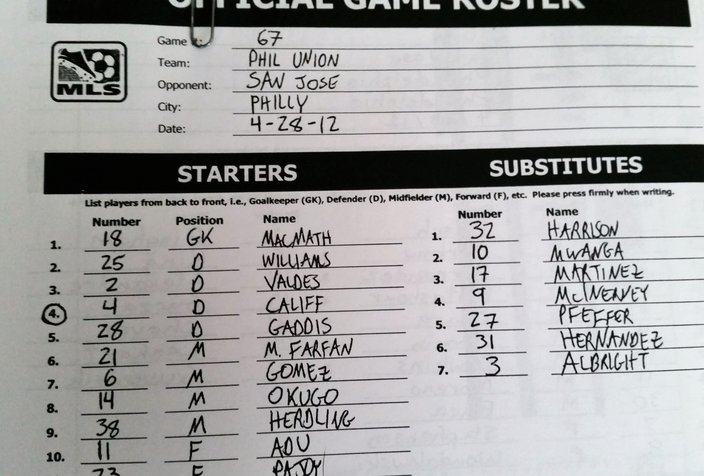 The Union came out in some sort of 4-2-2-2 for this game, with few options on the bench. You had 17-year-old Zach Pfeffer and 18-year-old Cristhian Hernandez as homegrown midfield options. Danny Mwanga, Josue Martinez, and Jack McInerney all played in the same position. The only defensive depth was veteran fullback Chris Albright. 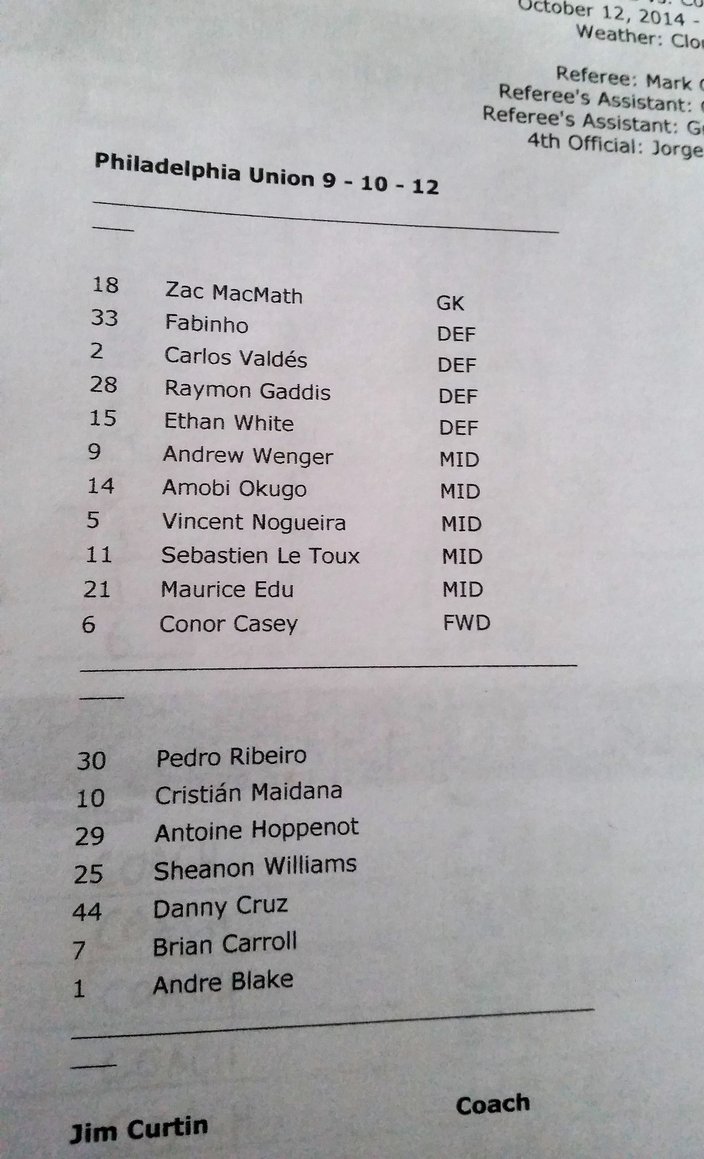 Similar to the U.S. Open Cup, you've got Ribeiro as Conor Casey's backup. Cristian Maidana started on the pine in this one, with Antoine Hoppenot finally getting a sniff of the gameday 18 under then-interim head coach Jim Curtin. Again, there was no center back depth in this lineup, with Amobi Okugo likely moving to CB in an emergency, then having Brian Carroll take his place.

Here's a lineup from the spring of 2013, when the Union were actually playing well to start the season: 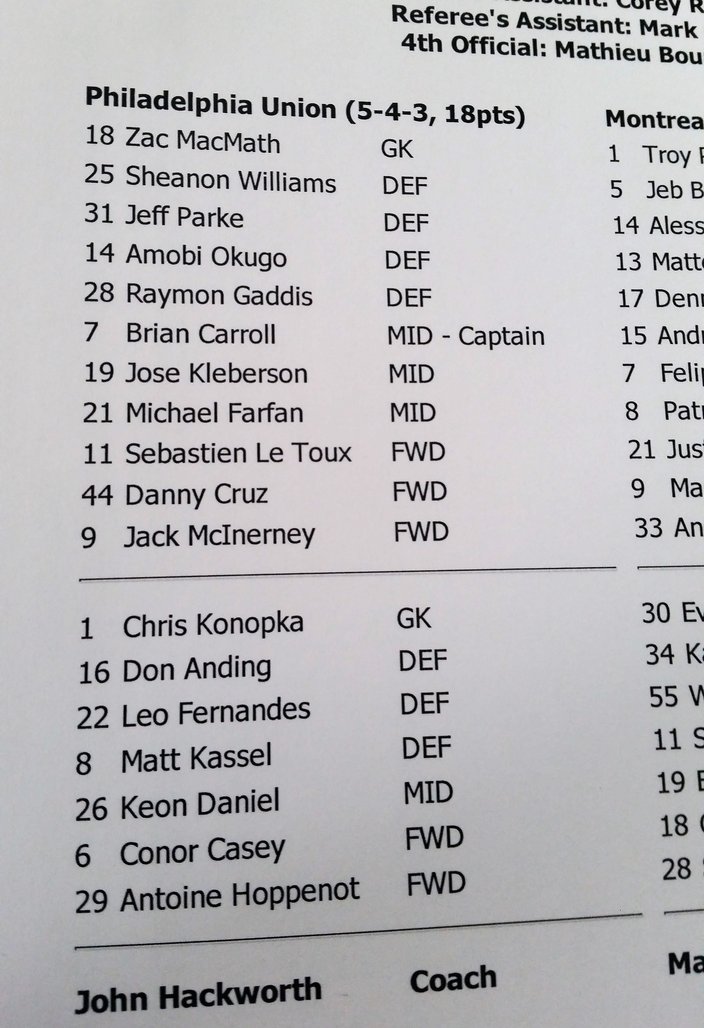 John Hackworth had Conor Casey and Antoine Hoppenot on the bench for forward depth. He gave Kleberson a rare start, and had Keon Daniel available as a sub instead. The defense looks like a mess, with first-year players Don Anding and Matt Kassel providing fullback depth. Leo Fernandes is incorrectly labeled as a defender.

When you take a look at the 2017 roster, you realize just how flawed past squads have been. This year, it looks like the club has legitimate depth at every single spot, with guys actually playing in their proper positions.

The question, now, is whether the starting eleven is good enough to finish in the top five of the Eastern Conference.