With five injuries in eight months, how concerning is Josh Yaro's long-term health? 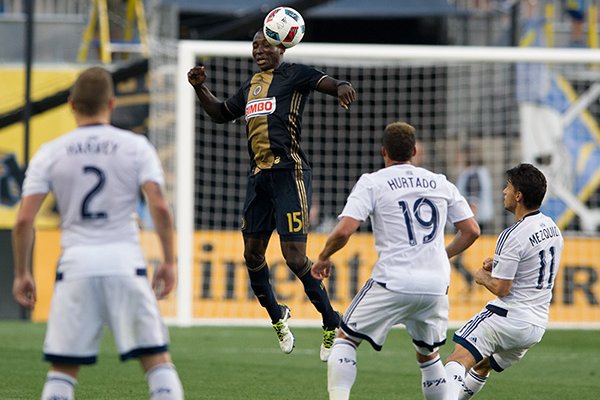 Union center back Josh Yaro will miss 10 to 14 games after undergoing shoulder surgery earlier this week.

Let's hope that Oguchi Onyewu is fit and healthy by March 5th, because he's going to be starting in the Union's season opener.

The 34-year-old veteran center back will step in for Josh Yaro, who underwent shoulder surgery this week and will miss three to four months of action.

It was just a few weeks ago that Yaro cleared concussion protocol stemming from two blows to the head that he suffered only 15 days apart at the tail-end of last season. The number two overall pick in the 2016 draft, Yaro played just 1,327 minutes during his rookie year.

The three-to-four-month projection means that Yaro will miss anywhere from 10 to 14 games, and this is what the schedule looks like during that time frame:

If Yaro makes it back in three months time, you're looking at a return for the May 13th trip to D.C. United. If he's out four months or more, we might not see him play until June 18th, which is a home game against Red Bull coming out of the international break.

Onyewu would be asked to start those 10 to 14 games, with Ken Tribbett and Auston Trusty also available to play. Tribbett started 19 games last year, but Onyewu hasn't started double digit games since 2014. Trusty is 18 years old and has yet to play for the Union first team.

You're looking at a tricky start in Vancouver. The Whitecaps play on artificial turf and have a number of speedy attacking players. It doesn't get any easier against defending eastern conference champion Toronto in week two, but at least the Union are at home and playing on grass. There are two more road trips before hitting a three-game homestand in mid-April.

In Thursday's scrimmage, a 1-0 loss to Chicago, Onyewu started alongside Richie Marquez and played 45 minutes. Tribbett entered at halftime and played the second 45. Both guys lined up at right center back, with Marquez on the left.

The good news, concerning Yaro, is that he'll be able to keep up his fitness level while rehabbing the shoulder. This isn't a Maurice Edu situation, where bearing weight on an injured leg limits the ability to run or get on a stationary bike.

Yaro's health history, a cause for concern?

It's not clear if Yaro's surgically repaired shoulder is the same one that he injured last May. The Union are back in Chester on Monday, so we'll ask about it then.

The center back started his rookie year with Bethlehem Steel, then made seven straight starts for the first team before having to leave the Orlando road game after a collision with forward Cyle Larin. The diagnosis at the time was a torn right labrum that did not require immediate surgery. He also did not have surgery at the end of the season.

Here's what head coach Jim Curtin said about that injury on June 13th of last year:

"I think if you told me where was a playoff game tomorrow, would Josh be able to play? I'd say he would. We're being a little cautious with the shoulder. It's 'uncomfortable' for him, is probably the best way to put it. It will be (a few days) before he does exercises that involve contact. Then we'll have him back as a full participant in training."

Yaro missed three games, then entered the June 22nd game against Chicago as a second half sub. He started the next two games and explained that, while he was wearing a brace and being careful, the shoulder injury did not "restrict him in any way."

In the second half of the season, Curtin went back and forth between Tribbett and Yaro as his starting right center back. Yaro played in consecutive wins over Columbus and Kansas City in late August. Tribbett started against Toronto and Chicago on August 20th and September 3rd.

Yaro's first concussion took place in the second half of the Portland game on September 17th, a match in which he was sent off in the 86th minute. He returned for the October 1st game against New York, suffered a first-half concussion, and was stretchered off the field.

There's some confusion regarding the recent news about Yaro clearing concussion protocol, because we were told that he cleared last October, just a few days before the playoff game. However, Curtin explained that Yaro had picked up a separate MCL sprain during training and would not be available for the October 26th game in Toronto. It's unclear whether that information was wrong, or if something else came up regarding concussion protocol during the offseason.

Yaro also missed time with a broken arm during his 2013 rookie season at Georgetown University. That injury required surgery. He also suffered a knee injury at the start of 2015.

We have to be careful when we slap the "injury prone" label on athletes, which might not be fair without all of the facts, especially related to private health matters.

What we do know is that Josh Yaro, in the past eight months, has suffered two shoulder injuries, two concussions, and an MCL sprain. Questions are going to be asked about his long-term durability.