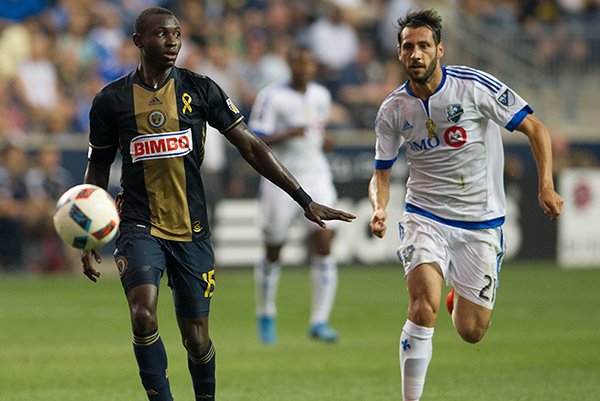 Horrendous news for Union fans broke around 1:15 on Thursday afternoon.

Second-year center back Josh Yaro will miss three-to-four months after undergoing surgery for a labral tear in his shoulder. In a press release, the team says Yaro suffered the injury during preseason training in Florida.

It's not clear if this is the same shoulder that Yaro injured last year, but I'm willing to bet that it is. That injury took place last May, and Yaro missed several games but did not require surgery at the time. He also did not have offseason surgery.

“Josh came into preseason very fit and sharp. This setback is tough, but the right thing to do was to be proactive and surgery to repair the shoulder is what’s best for Josh long term. We know he will come back stronger than ever. We have a very deep roster that we believe in, and we know the next man will step up in Josh’s absence.”

That next man up is Oguchi Onyewu, the 34-year-old veteran who signed with the Union just two weeks ago. If he goes down, you're looking at Ken Tribbett or Auston Trusty in the starting lineup.

Three to four months means that Yaro won't be coming back until mid-May or early June.

It feels like every game between Chicago and Philly is played in awful conditions, and Thursday's scrimmage in Florida was no different.

Windy conditions made for a sloppy preseason matchup at the IMG Academy in Bradenton.

This was our first look at the 2017 Philadelphia Union unless you somehow had access to the first couple of closed-door scrimmages.

C.J. Sapong, Charlie Davies, Brian Carroll, Eric Ayuk, and Auston Trusty did not play in this game. Trusty was just named to the 20-man roster for the 2017 CONCACAF U-20 Championship.

Haris Medunjanin has not yet joined the team from Europe, so Alejandro Bedoya played as a number eight while Roland Alberg started in the ten spot. Fabian Herbers played on the left side of midfield for the first time.

The Union return home this weekend, then head back to Florida for the Suncoast Invitational. That tournament opens with a game against Tampa Bay on February 18th.

Wednesday, Curtin spoke with reporters via conference call, touching on a variety of topics.

One was the signing of Adam Najem, a former New York Red Bulls academy product who recently graduated from the University of Akron. Philly sent New York a 2018 second round draft pick for Najem's rights.

He's a creative midfielder with a nose for goal who probably would have been a top ten pick had he entered this year's SuperDraft.

"(He's an) intelligent, humble, quiet kid, but when he gets on the field, I would say he makes a lot of noise, especially around the goal," Curtin explained. "He's a guy who can play a final pass, scores a lot of goals in practice, and scored a lot of goals in college as well. He has that skill set that you can't always teach or coach. Some guys just have a knack around the goal. I think Adam falls into that category. He's not the biggest guy, but I'm not a guy who cares too much about size or speed. I'm more concerned with a guy who sees the game a little different. He sees it one and two passes ahead, so he sees where the next ball should go at all times. He's aware in tight spaces and a really clever player. He's a guy I like a lot and he's really putting work in on the defensive side of the ball, too, which has been a real positive."

Options at the eight

I mentioned before that Alejandro Bedoya played the No. 8 on Thursday since Haris Medunjanin is not yet with the team.

When he does arrive, I think you'll see Bedoya move up a spot in the midfield. That moves Roland Alberg to the bench, but I just have a hunch that he's going to be the odd man out.

I asked Curtin about it on the conference call.

"The hope with Alejandro, whether he's at the eight or the ten in different moments, he's always a guy who likes to run hard in the box, whether that was as a second forward at Nantes... he played a little bit of the ten for us last year and I thought he played it well," Curtin said. "But also as the eight, him and Haris have the ability with their feet to kind of control the tempo of the game. I'd say, of the two, Bedoya is the one who's more likely to get into the box, although Haris can shoot from distance, for sure. They have different skill sets. I'm anxious to get them all in here and working together. The two of them with a Roland, or Ilsinho, or Fabian Herbers, all of the creativity and good soccer you have with that group, we want to try and find what the best combination is. That will be determined in these preseason games. I can't stress how important they are for our group, especially once Haris gets here."

Curtin mentioned that Derrick Jones is also in the mix for the number eight spot. Jones played about 27 minutes in Thursday's scrimmage but looked to be playing as a number six.

Keegan Rosenberry rejoined the Union when he was sent home early from the United States' January camp.

It was Rosenberry's first run with the national team, so it's no surprise that he was not part of the 23 man roster for the friendly matches against Serbia and Jamaica.

One disappointment, however, is that manager Bruce Arena decided to experiment at right back with a pair of veteran midfielders. Graham Zusi started both games, then came out in the Jamaica match for Brad Evans, who played right back under Jurgen Klinsmann.

Arena obviously has to focus on winning the next World Cup qualifier against Honduras, and he does have DeAndre Yedlin and Timmy Chandler as right back options who currently play overseas and were not part of the January camp.

Still, using a 30-year-old midfielder to play right back, instead of giving Rosenberry a shot instead, was viewed as a bit of a head scratcher by some people.

Curtin gave a fair and reasonable response when asked about it.

"I'd say that Keegan is disappointed," he said. "He obviously wanted to get his first cap after a hard January camp. Bruce left a voicemail (earlier this week). He just wanted to check in and get some more feedback on how the guys did. Listen, it's a step up obviously for Keegan to go with the national team, where you're competing with those guys every day. I still think he learned a ton from it. Any athlete would be a little disappointed to get sent home. He'll learn from it and I think he'll be better because of it. You look at the right back spot right now and it's a bit of an open (spot), and Bruce addressed that before January camp started. It's a spot where we're thin. We experimented with Graham there, who's obviously had a great career and is an intelligent player. Brad Evans falls into the same category – great career, great soccer player. Bruce has a focus now on just winning the next game against Honduras, so maybe he saw this as not a time to take a risk with a younger guy, which is fair. He'll know what his plans are, whether it's DeAndre, or (someone else). But I think Keegan at least made a little bit of an impression on him. I think he'll be in Bruce's mind for the future."