The Philadelphia Union found a replacement for Vincent Nogueira

All three of those players brought their own qualities to the number eight position, and the Union found ways to win, but the team really missed Nogueira's ability to set the tempo and control a game.

Enter Haris Medunjanin, a 31-year-old Bosnian ball mover with more than 50 international appearances and a decade of experience playing in the Netherlands, Spain, Turkey, and Israel.

He's a technically gifted central midfielder with an accurate left foot. Medunjanin will spray the ball around the field, take set pieces, and occasionally bang in a long range goal. He's a bigger Nogueira who likes to get forward just a bit more and will fit in naturally as a number eight in the Union's 4-2-3-1 system.

What he won't do is sprint back 30 yards to make a defensive play. He won't put in a crunching tackle on an opposing midfielder or beat anybody for pace. He's two years older than Nogueira and He'll need a committed midfield partner to handle defensive responsibilities in front of the back four.

With the recent additions to the roster, you're looking at something like this for opening day: 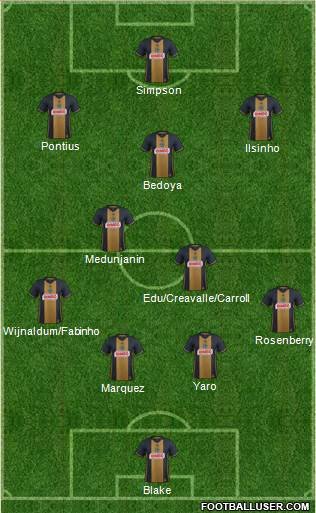 I'd assume it's Creavalle starting in Vancouver, barring some miraculous recovery from Maurice Edu.

Can you swap Bedoya and Medunjanin in that lineup? Sure, you could do that, but I think both players are in their best spots. Having seen much more of Bedoya's game, I like him as a mobile number ten who can press defenders in their own area. You could certainly try Medunjanin as a CAM, but that might be redundant since Roland Alberg brings the same qualities to that position. Philly needs someone who can connect the dots from back to front and get the ball to the goal scorers.

I found a great highlight video from a recent game that Medunjanin played for Maccabi Tel Aviv.

The thing that stands out to me is how similar he is to Nogueira in the way he drops into that deep left pocket to receive the ball. Keep an eye on how he pulls back, checks over his shoulder, and points to where he wants the ball.

Some key moments from the video that I noticed:

0:13 – starts play from deep, tries a pass through the lines
0:22 – starts play from deep, tries another line-splitting pass
0:36 – checks shoulder, drops into pocket, demands ball, cycles it to the other side of the field
1:54 – drops into space, motions for left back to vacate, plays ball to left back in stride
2:20 – ball in box, turns and gets off a shot in tight space
6:17 – receives ball, immediately hits a 30 yard ball into the box
10:35 – touch in box, turn, puts ball on weak foot and shoots

What I don't see in that video is defensive ball winning, but Nogueira wasn't that type of player either. Vince would drop into good defensive positions, put himself in front of the backline, and use his smarts to win the ball. It's key to have someone like Edu or Creavalle playing next a guy Medunjanin.

I also didn't see him use his right foot. In most cases, he had time and space to use his stronger left foot, but there was one clip where he tried to hit a left footed switch in traffic, and ended up striking an opposing player and losing possession.

Anyway, when you watch that video, this is the area where he starts in order to build from the back: 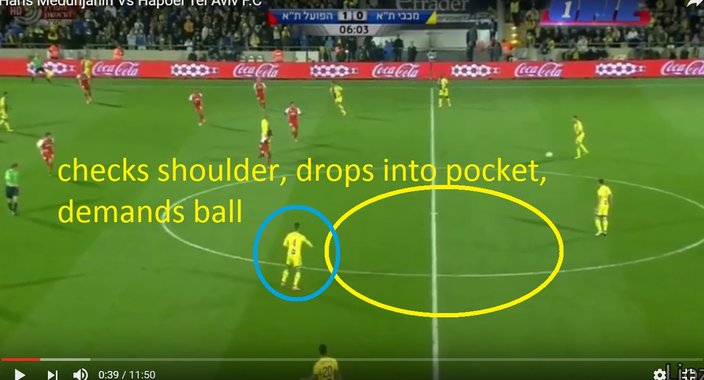 You can see him with his arm up, pointing to where he wants the ball. Every time he slides into that pocket, the left back, Omri Ben Harush, immediately moves forward and gives up the space. On the other side, his midfield partner, Gal Alberman, knows to stay where he is and move forward a bit. That's the same exact spacing that Brian Carroll would employ when paired with Nogueira. Those two were an effective partnership for the Union because they understood how to give each other room to maneuver. 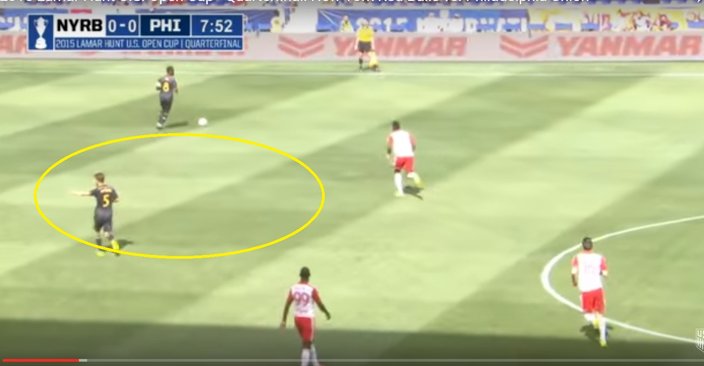 Going back to the Youtube clip, Medunjanin's set piece delivery did look a bit off in this particular game. He overcooked a few corner kicks and free kicks, but that happens. It tells me that he's trying to drive the ball instead of loft it into the box. Tranquillo Barnetta was also occasionally erratic in that department.

You can see, from just one Youtube clip, that Medunjanin really does demand the ball and try to pick out good passes from back to front. That's something that Bedoya just doesn't do. Bedoya is much more of a two-way utility guy who does a lot of little things well. I just have a gut feeling that Bedoya at the No. 10 is the way they're going to go, and I really like him in that position because he's a grinder who improves as the game goes on.

Medunjanin is a ball-moving number eight who should hopefully solve a lot of the problems the Union had down the stretch in 2016.

There also aren't many players on the roster who can do something like this: