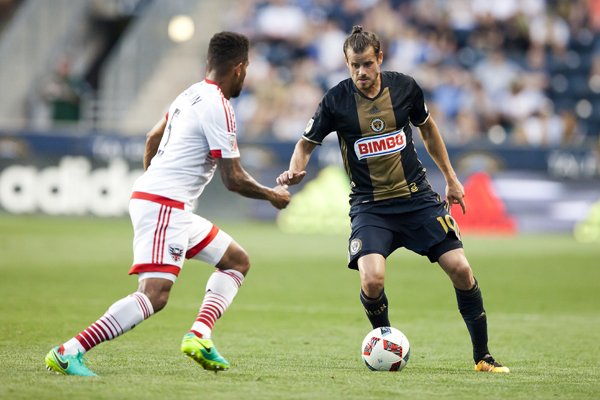 Tranquillo Barnetta will leave the Union at season's end and return to his hometown club of St. Gallen in Switzerland.

It was a rainy and rather dismal Wednesday in Chester, but the Philadelphia Union's playoff hopes look bright.

There's a little bit of breathing room with three games left to play, and a lot of that depends on the outcome of tonight's Montreal and San Jose matchup.

A win will move the Impact to within one point of the Union in the eastern conference standings. A loss will keep intact the four point cushion that currently separates the clubs. If the season ended today, the Union would host Montreal in a wild card game. Should the Impact jump into fourth, the Union would be headed to Quebec.

First, Jim Curtin's squad travels to New Jersey this weekend, then finishes with a pair of home games, one against Orlando and one against Red Bull. A win on Saturday will all but wrap up a playoff spot.

"It's tough to put a number on it," Curtin said at his midweek press conference. "We do know that we're in a good spot. We've earned all of the points that we've got. We'd like to have a couple more points, and have it been taken care of already. Going to Red Bull is a difficult environment, but it's a place where we think we can get points. Then, to finish with two games at home, we're shooting for nine. That's the way to put it."

Tranquillo Barnetta was off to the side towards the end of Wednesday's session. The midfielder missed Saturday's game in Toronto with a knee issue but looks to be on track for the trip to North Jersey.

Ilsinho did not train today and received a shot for the plantar fasciitis that has been causing him pain in the second half of the season.

Center back Josh Yaro cleared concussion protocol and is now a full participant in practice.

Barnetta did technical part of training and some training in bigger spaces. "will play a role" Saturday, Curtin said

Going (going) back (back) to Switzerland

Barnetta made news earlier this week when he announced that he would be leaving the Union at the end of the season to return to his hometown club of St. Gallen in Switzerland.

The 31 year old will see out his contract, so this isn't a case of "quitting" or giving up on Philadelphia. The veteran has missed some time this season with knee tendinitis, which is the result of past surgeries. He explained that he wanted to return home with something left in the tank.

"That was the big decision," Barnetta said. "My thoughts were, if I play one more year here, if I'm still able to play at a high level back home, I was thinking, 'okay, if I don't do it now, maybe I'll have some problems'. Because I know I've had a couple of injuries, and I've had to take a couple of breaks. I think I would regret if I stayed one more year and then I wasn't able to play back home."

Curtin had high praise for Barnetta.

"This will be my opinion, but pedrigree-wise, what he brought to the locker room, what he brings to young players, his talent on the field – the best player that ever wore a Philadelphia Union jersey," Curtin said. "It's a short history that the club has, but one where, he's a guy that gave everything for the team, gave everything for the fans, and did it the right way. You won't meet many people like him in this game."

Curtin on Barnetta: "This is by no means the end. We want his last game with the Philadelphia Union to be the MLS Cup."

This will be the third meeting between New York and Philly in 2016.

Both prior games followed the exact same template, with Red Bull scoring early goals, only for the Union to rally and flip the script in the second half.

The Union won 2-1 at home in the U.S. Open Cup round of 16. The two clubs then played to a 2-2 draw in regular season play about three weeks later. Both times, New York seemed to tired in the second half, and high pressure on the Union backlined waned.

This time, New York will have home field advantage as they push for the top seed in the east.

"I think they're going to definitely try to play their game," said center back Richie Marquez. "They're a high pressing team and they're going to bring that early on. They sustain it for ninety minutes. I think it's us looking back at the film and seeing how we did, what we did well, what we did wrong, executing the parts that we did do well. I think it's going to be a high-paced game and we're just going to have to do our best to slow it down and control it."

Jim Curtin: “There’s no secret to the Red Bulls’ press. Their press is the best in our league."

Last week, crews began re-sodding about 25% of the pitch at Talen Energy Stadium. Two temporary stages were built in front of the River End for the Rock Allegiance tour.

The Union's next home game is on October 16th, so there's still about two and a half weeks to let the sod patches grow in. The grass already looks pretty good, despite a couple of patches here and there. 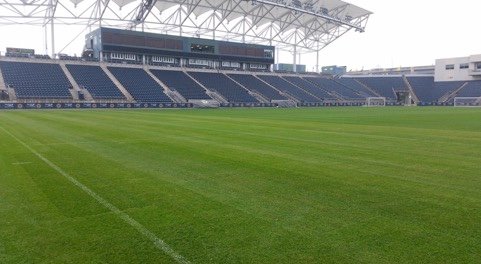