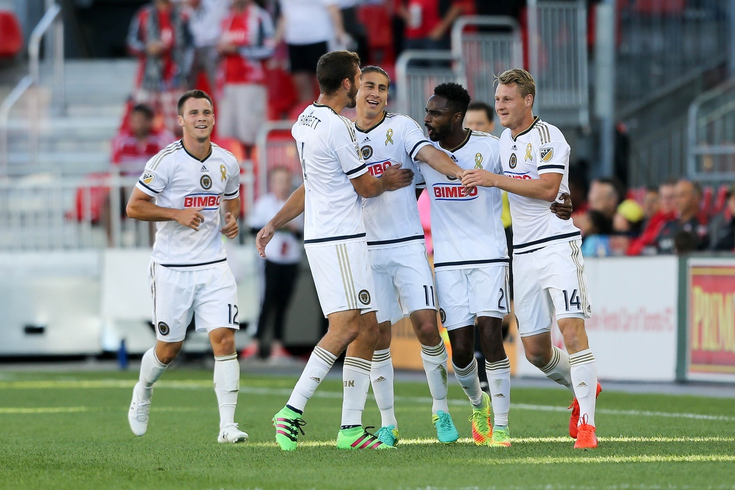 The immediate reaction to this game might be to lament the second half momentum swing that nearly cost the Union a result, but don't let that cloud your judgment – this was a good performance and a critical road point.

Tactically, there's a lot to talk about, as the Union came out in a conservative shape but drew up an aggressive game plan.

That might not make sense, but when you analyze each half, one in which the Union dominated, and one in which Toronto dominated, the patterns of play are easy to recognize.

The Union watched the game film of last week's 3-3 draw between New York and Toronto, and they used some of the same elements of the Red Bulls' style of play in the first half. That means they pressed high up the field, forced Toronto turnovers, and created offense out of defense. Jim Curtin's team peppered the hosts' goal, firing off six shots while preventing Toronto from attempting even one.

It really should have been 2-0 going into halftime.

In the second 45, Toronto adjusted to the Union pressure, which began to wane. The addition of Marco Delgado changed the positioning a bit, and Toronto's wide midfielders were able to narrow, which is usually how they play. Without as much clogging in the center of the park, the likes of Delgado and Benoit Cheyrou were able to collapse in a way that Will Johnson was unable to do in the first half. That allowed Michael Bradley more time and space to be the deep-lying distributor.

The result was a 1-1 draw that almost didn't happen, but the Union escaped a late game penalty shout and received some timely intervention from the left post.

Bedoya at the 10, plus a double pivot

When Tranquillo Barnetta did not travel with the team, I thought for sure Roland Alberg would start at the number ten spot, with Alejandro Bedoya playing next to Brian Carroll.

I also thought they'd have no shot to win with Barnetta on the shelf.

So, I was completely wrong with both of those predictions.

Instead, Curtin played Bedoya at the ten for the first time this season and paired Carroll with Warren Creavalle in the defensive midfield.

This really accomplished two things for the Union.

One, it allowed them to defend from the number ten spot. With Alberg on the field, you don't get the defensive mettle and counter-press that Barnetta brings to the table. Bedoya is much more of a two-way player, and while he doesn't have the goal-scoring prowess that Alberg does, he still fired off this goal of the week nominee:

Happy to have scored my 1st GOAL for @philaunion & in @MLS! Great team effort in Toronto!#IllHaveSomeSalsaWithThatChip #DOOP #MLS pic.twitter.com/BEFUHq7Ytx

Second, the usage of Creavalle at the eight and Carroll at the six essentially shielded Ken Tribbett and Richie Marquez from the centrally-produced through balls that absolutely killed the Union in the 3-1 home loss against Toronto. When Creavalle pushes higher up the field, he's able to play that box-to-box destroyer role, allowing him to squeeze the midfield while Carroll holds in front of the backline.

It's basically like using a stopper and sweeper, similar to how your high school played, but moving that idea into the midfield.

The clip above is a perfect example of that idea, and it really encapsulates the best and worst of Warren Creavalle's game. In that sequence, he wins a loose ball, carries it forward, and makes a horrendous pass, only to keep running and retrieve his own pass as three Toronto players completely fail to react.

He turns it into a cross that C.J. Sapong holds. He finds Bedoya, who finds Fabian Herbers, who gets off a point blank shot on goal.

You wouldn't see Creavalle do something like that from the number six spot, because he's tasked with sitting a bit deeper.

To go along with the Red Bulls' theme, take a look at how the Union narrow themselves on this sequence where they eventually win the ball and regain possession. 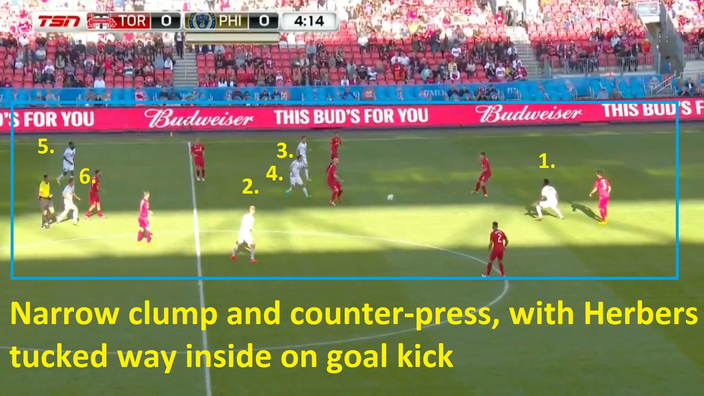 You see there are six players within a 30-yard rectangle. Toronto has eight players in that box.

One of the misconceptions about a press, in any sport, is that you can only do it from the run of play. That's not necessarily true. You can press off of pretty much anything.

For instance, Barcelona teaches their players to win the ball back within six seconds of losing possession. That's a counter press. Bob Huggins will run his basketball press off of a missed shot attempt, not just an inbounds play or a successful field goal. New York will bring secondary pressure and tertiary pressure when cues pop up, such as a defender dribbling into a corner or turning his back.

In this case, the Union are clustered on a goal kick and retain that shape as they put immediate pressure on the center back after Creavalle wins the original header. Michael Bradley has three guys around him and can't do much with the pass he receives.

Ken Tribbett had a shocker against Toronto last month, and it wasn't entirely his fault.

This time, he was set up to succeed by Curtin, who deployed his team to junk up the midfield.

Yes, Sebastian Giovinco was absent from this game, but no Toronto players were able to get behind the defense with the ease that they showed in August. Altidore wasn't able to muscle Tribbett the way he did in round one.

It's because that duo of Carroll and Creavalle was able to pressure Toronto midfielders and prevent those easy balls behind the defense, or in towards the strikers. Even in the second half, they didn't do a ton of attacking over the top and through the middle, instead getting the fullbacks further up the field. That's how they found the equalizer, which came from left back Justin Morrow after a nice bit of wide work from Jonathan Osorio. 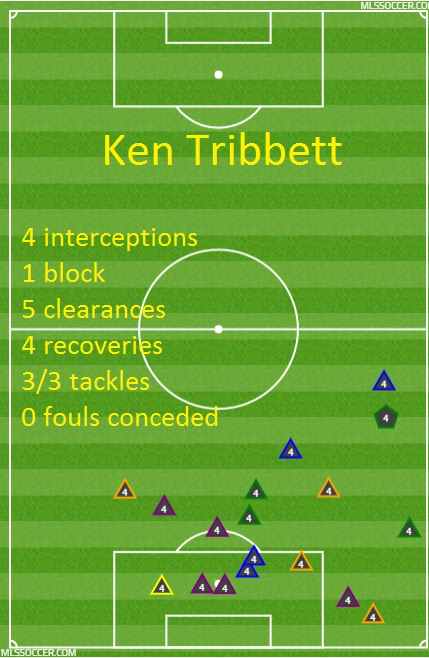 Tribbett had almost five times as many defensive events as Marquez did in this game. He went three for three in tackles and conceded zero fouls in the process. The yellow triangle is one block, which came on the late-game sequence where he slid in front of a Mo Babouli shot, only to look up and see Altidore hit the rebound off the post.

I think Tribbett played that sequence well, as Babouli was able to get around Marquez for the shot attempt. On Altidore's rebound, Tribbett is laying on his back and doesn't have time to recover and put in another block. On the second attempt, there was a bit of ball watching by the entire Union defense, and Altidore hit one over the cross bar.

Overall, the design protected the backline with an extra midfield layer, and that worked well until the pressure wore off and Toronto started to find chinks in the armor.

He was active early and played a key role in the early pressing game.

However, for the fifth time in six games, he finished without a shot on goal.

He had three great first-half looks, but just couldn't get the ball into the back of the net.

Herbers later assisted on the Bedoya goal, and now leads the Union with seven helpers on the year.

He's really starting to learn that wide-right position, and his penchant to come inside is really allowing him to get on the ball while also aiding defensively.

Of course he scored the golazo to put his team ahead, but it was the defensive work rate and two-way performance that really put the Union on the front foot for the better part of 60 minutes.

A bit of a quiet one for Pontius after a great performance in Portland.

I like him better as an eight, just because I think it maximizes his defensive capabilities. He's still not going to pass the ball like Vince Nogueira or Alejandro Bedoya, but at this point in his career, we know what kind of player Creavalle is.

It's hard to give Carroll a C, because he really was excellent for a large chunk of time.

The two issues I had with his game were the decision to pass to Sapong instead of taking that shot on goal, and the 1v1 defense that failed him on the Toronto equalizer. To be fair, that's not his strength, but he got pulled wide to cover Osorio and took an uncharacteristic stab at the ball.

He was a benefactor of the press, which allowed him free reign up the left flank early in the game.

Fabinho is finding plenty of time and space to hit crosses into the box, but the one thing that bugs me is the amount of backspin and float he puts on the ball. He hits crosses frequently, but they are usually low percentage deliveries.

Marquez was much less active than Tribbett, but passed the ball well in this game, going 19 for 22 and only trying to hoof it up the field twice.

Yeah, Giovinco wasn't on the field, but he played a much, much better game this time around.

After last week's rough outing, he logged three successful tackles right around the penalty area. That goes along with five interceptions, five recoveries, and seven clearances.

The only defensive issues I saw were a bit of ball-watching on the Altidore post effort, and a high bit of pressure that put Carroll in that wide, one versus one defensive situation against Osorio.

Offensively, he didn't get forward much and actually didn't put in a single cross.

I originally thought he could have done better on the equalizer, but Morrow put some sting into that ball from a tight angle.

He needs to start to be effective, because he isn't adding anything defensively off the bench, and that hurt the Union on Saturday.

Again, barely a sniff for Davies, who comes on and chases the center backs around when his team is trying to see out a result.

He got the penalty shout correct. No way that's a PK, not when the attacking player steps in front with no attempt to play the ball and falls over with ease.