Union notes: Power training, German imports, and doing what the doctors tell you 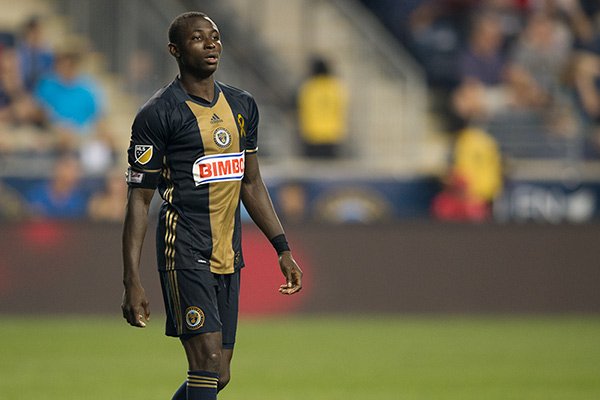 The most pressing issue for the Philadelphia Union shouldn't involve the playoff race, but rather the health of rookie Josh Yaro.

Yaro looked to be knocked unconscious when he was caught between Andre Blake and Aurelien Collin during an aerial challenge in the first half of Saturday's 3 to 2 loss in New York. He was stretchered off the field and taken to the locker room but did not go to the hospital.

The center back was present at training on Wednesday morning but did not take part in any team or individual activities.

Head coach Jim Curtin says Yaro will undergo the same league-mandated protocol that he completed just two weeks ago. The first-year defender suffered a separate concussion in the Sept. 17th match against Portland.

Curtin said the hope is to have Yaro back in training by next Tuesday and did not want to jump to conclusions on whether or not the rookie should be shut down for the season.

"I'll do what the doctors tell me," said Curtin. "How they advise is the way I'll handle that. It's one of those things where they don't ... the brain is still a big unknown, obviously. The one thing I have gotten back, and I've heard it before, is that there's no correlation to what [severity of] impact impacts the brain. Sometimes the lightest of hits can cause a concussion, a severe concussion, and sometimes a huge impact like we saw [Saturday] doesn't necessarily mean that he's out for the rest of the year. We'll do what the doctors tell us and we'll obviously listen to Josh's input as well. We'll do what makes sense in terms of his safety."

The only non-participants in training were Ilsinho and Alejandro Bedoya. The Brazilian midfielder is still dealing with lingering plantar fasciitis issues and worked to the side with a trainer. Bedoya withdrew from international duty because of a rib injury, but Curtin expects him to be ready for the critical October 16th matchup against Orlando.

Curtin on Bedoya: "He'll be fine." Leaves door open for a US call for the second friendly.

The newest addition to the Philadelphia Union is German midfielder Kevin Kratz, who signed about three weeks ago but only recently received his P1 Visa.

The 29-year-old came through the Bayer Leverkusen youth ranks, then played for the club's second team before moving on to second division club Alemannia Aachen. Kratz then enjoyed spells at Eintracht Braunschweig and SV Sandhausen.

Kratz says he was looking to play in a new country after spending his entire career in Germany.

"I think most of it was my agent, Justin Stone," said Kratz of his stateside move. "He really worked hard on getting me to the U.S., and that was my dream – to come here and play in a different country. I've had a few clubs in Germany but I wanted to have a new experience, with a new culture, and that's how I ended up here."

Kratz say he played as a number ten at Sandhausen, but has also played holding and wide midfield roles. He knows Tranquillo Barnetta from their shared time at Leverkusen.

The club recently agreed to a naming rights partnership with Chester-based Power Home Remodeling. The practice fields and training complex are now branded collectively as the "Power Training Complex", with an official ribbon cutting ceremony and grand opening scheduled for next Thursday.

Bit more privacy with the new banners, complex used to be wide open with just a short perimeter fence pic.twitter.com/YPfG9524i6