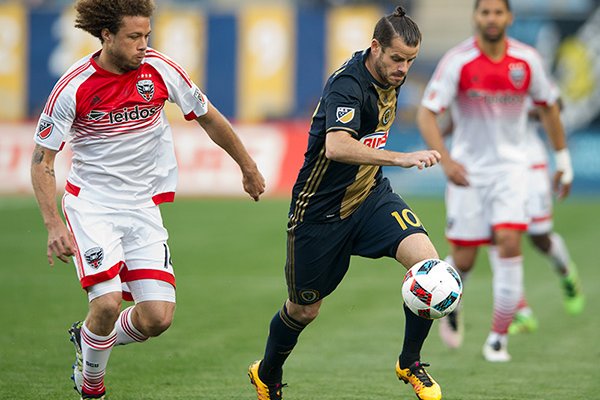 Union midfielder Tranquillo Barnetta will return to Switzerland when his contract expires at the end of the season.

It's not often that a foreign Philadelphia Union player departs under the circumstances surrounding Tranquillo Barnetta.

Some, like Vincent Nogueira and David Myrie, simply disappear without warning. Others, such as Carlos Valdes and Carlos Ruiz, become lost in some sort of head-scratching and labyrinthine drama. Players like Porfirio Lopez and Juan Diego Gonzalez rode the bench until they were waived at season's end.

So it was unexpected when Union communications put out a 7 a.m. press release on Tuesday,  announcing that Barnetta, the veteran midfielder, would return to Switzerland after the season to rejoin his hometown club of St. Gallen.

The result is a pseudo-farewell tour, though certainly nothing like the Kobe Bryant or Derek Jeter send-offs that we recently experienced. There will be no giving of gifts, or shedding of tears, or attempting of 45 shots while your teammates stand around and you lose the game by double digits.

Instead, Barnetta will play out his contract and head back to Europe.

"It wasn’t an easy one," said Barnetta of his decision to return home. "I had a great time here and still have (time remaining). But at the end it was a hard decision because I grew up there, and to play in front of my family and friends was always a dream. I can do what I always (wanted) to do. When I first left, I wanted always to come home at one point and play again for my hometown."

This isn't the case of a player "quitting" on the team. Barnetta only signed an 18 month deal. He honored his commitment to the club, traveled around the country, played on turf, and didn't get any preferential treatment from the league (or the referees).

The decision to move on was made only recently.

"We talked three or four weeks ago with (Sporting Director Earnie Stewart) and the club here," Barnetta said. "I was thankful that they talked to me about how their plans are, and just wanting to let me know. I just asked them for a little bit of time, because like I said, it wasn’t easy to say, 'yeah I will leave'. I think it was probably ten days ago that I decided, 'okay let’s do this'.  And then I told the team because I didn’t know when it was coming out (in the press). Sometimes there’s the league (press release) or something, so that’s why I told them last week and I can tell you it wasn’t easy."

Barnetta is 31 years old and started the season on the shelf with knee tendinitis that had come about as the result of prior surgeries while playing in Germany.

He's missed a bit of time since then, and usually takes a day or two to recover after playing on turf.

Barnetta explained that he felt like the move had to be made now, instead of risking a return home with busted knees and an empty gas tank.

"Definitely that was the big decision," he said. "My thoughts were, if I play one more year here, (can I) still play at a high level back home? And I was just thinking, 'ok if I don’t do it now, then maybe I'll have some problems', because I know that I have a couple of injuries and sometimes I have to take some breaks. I think I would regret if I stayed one more year and I’m not able to play back home. That was the big (factor) to go back home at this point."

Barnetta came through the youth ranks at St. Gallen and made his senior team debut for the club back in 2002.

In 2004, he earned a transfer to the German Bundesliga, where he would spend the next 12 years playing for Bayer Leverkusen, Schalke, and Eintracht Frankfurt. Barnetta was capped 75 times for Switzerland and appeared in two World Cups.

He ended up in Philadelphia when former Frankfurt teammate Oka Nikolov, who had a brief spell with the Union in 2013, introduced him to the club.

"I didn’t have a real list of where I wanted to go because you never know how you’re going to play," Barnetta added. "But I can say that when I made this decision, it was one of the best ones I did, because I’ve had a great year so far and I hope we can continue like this, and not just on the field, but also off the field. It’s good to see a new culture, meet some new friends from different countries, and it was really great. I’m really thankful for everything."

Jim Curtin: Tranquillo Barnetta spoke to his Union teammates before allowing word to get out publicly about his departure.

Head coach Jim Curtin has been consistent and effusive in his commendation of Barnetta this season, identifying him as one of the best number tens in Major League Soccer.

A key cog in the Union attack, Barnetta's ability to press, defend, and recover – all while creating chances going forward – has made him a shoe-in for the starting eleven.

"With Tranquillo, first and foremost, obviously, I want to thank him for everything that he’s done for the club," Curtin said at his midweek press conference. "This is by no means the end. We want his last game with the Philadelphia Union to be in MLS Cup, and I’m going to preach that to our guys, to prolong it and run with him within our group as long as possible. (He's) a special player that meant a ton to the club, who I learned a ton from as a coach. I think he enjoyed his time here. If you rewind back to when he signed his deal and we offered several years, he was very content and adamant about taking an 18-month deal. You know, a lot of people say they’re not about money, and this and that, but Tranquillo truly means it when he says it. He came here at a very big discount to what his value was in the European market. He had a goal of playing for his hometown club, which I respect at the end of the day, and it was an honor to have him here. He's a special player. Again, this’ll be my opinion, but pedigree-wise, what he brought to the locker room, what he brings to young players, his talent on the field: the best player that ever wore a Philadelphia Union jersey, in my opinion."

That's the highest praise you can give to an athlete, and Curtin is probably right.

Sebastien Le Toux certainly put together the best resume while wearing a Union shirt, but Barnetta has the best pedigree of the bunch. You could certainly argue that Faryd Mondragon had a career that rivals that of Barnetta. Kleberson, under-valued and under-utilized as he was, won a World Cup with Brazil and played for Manchester United.

"I don’t want to speak for him, (but) I think that the chronic knee, the feeling he has in his knee is the scare to him, that if he doesn’t pull the trigger and go now, he might never be able to be himself playing for his hometown team," Curtin added. "So, I respect that. You wanted him to stay here. We have a great relationship. He gets along great with the technical staff, with Earnie, and everybody, but you won’t hear anyone say a negative word about the guy. Again, I think the timing of it, and the fact that it was only an 18-month contract, he gave everything, he gave everything that he had and I think he still has more to give down the stretch here. And he will."

Barnetta did not play in Toronto last week after banging knees with Fanendo Adi during the 2 to 1 loss in Portland.

Curtin expects his number ten to play a role in New Jersey this weekend, but the worst case scenario would be a healthy and rested Barnetta available for the final two home games.

Thankfully for Union fans, the story isn't over just yet.