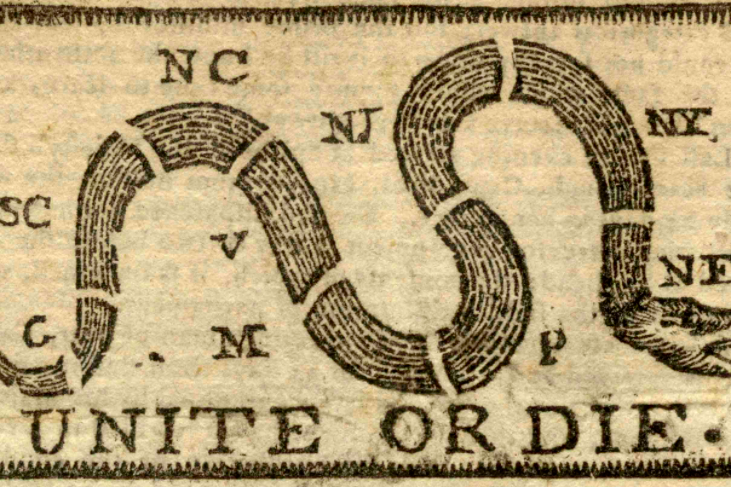 A 1774 issue of Benjamin Franklin's newspaper The Pennsylvania Journal and the Weekly Advertiser will be up for auction Thursday. It features the iconic 'Unite or Die' cartoon.

Calling all history buffs — you have the chance to own a memento from the American Revolution.

A copy of Benjamin Franklin's newspaper The Pennsylvania Journal and the Weekly Advertiser is going up for auction Thursday through Nate D. Sanders auctions.

The newspaper for sale, published Dec. 7, 1774 in Philadelphia, has a "Unite or Die" masthead, a variation of Franklin's original "Join, or Die" emblem. It is considered the first American political cartoon.

Franklin first published published the cartoon, which depicts a disjointed rattlesnake, in 1754 as a way to rally the British colonies during the Seven Years War between Great Britain and France.

Franklin repurposed the original cartoon in 1774 after the British Parliament passed the Intolerable Acts, a series of laws aimed at punishing Massachusetts for the Boston Tea Party. They were one of the main catalysts that led to the first Continental Congress and ultimately the American Revolution.

Franklin used the cartoon in the masthead of The Pennsylvania Journal during portions of 1774 and 1775, switching the phrase to "Unite or Die," according to the auction house.

The phrase became a rallying cry during the American Revolution, with the cartoon being used by several newspapers backing the rebellion. It became a symbol of American independence and inspired the phrase "Live Free or Die" and the "Don't Tread on Me" flag.

The newspaper for sale includes stories about British-colonial hostilities, including General Thomas Gage enforcing the Intolerable Acts in Massachusetts Bay.

The newspaper is 10.125 x 16.125 inches. There are a few editor's marks in the margins, but the auctioneer described it as being in "very good" condition.

Another copy of The Pennsylvania Journal — published Dec. 28 1774 — was brought to a Goodwill store in Gloucester County in 2018. The American Philosophical Society, an organization founded by Franklin in 1743, bought the newspaper for an undisclosed amount.

At the time, Timothy Hughes, a rare newspaper dealer in Williamsport, Pennsylvania told the Washington Post that original copies of newspapers featuring the cartoon are rare. In four decades, he'd seen just five or six.

That same year, a 1754 issue of The Pennsylvania Gazette, which features the original version of the cartoon, was auctioned off for $50,000. The copy was one of just two known to exist — the other is housed by the Library of Congress.