The owner of the affordable housing complex plans to sell the property, forcing long-term tenants to move 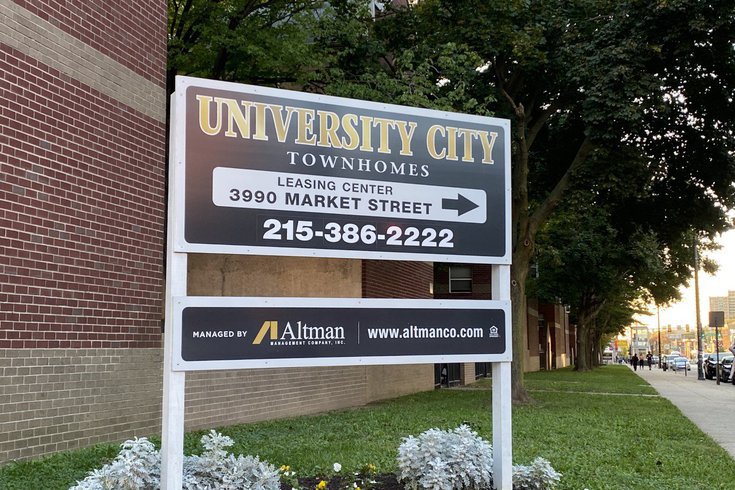 An encampment outside the Univeristy City Townhomes was dismantled Monday morning as residents and activists protested the looming loss of subsidized housing at the complex, which is slated to be sold.

The tent encampment outside of the University City Townhomes was torn down Monday morning by the Philadelphia Sheriff's Office and other law enforcement officers, who were met by a group of protesters opposed to the building owner's plans to sell the affordable housing complex.

About 15 tents had been set up outside the 70-unit facility at 40th and Market streets as a Sept. 7 deadline approaches for long-term residents — mostly Black and Latino tenants — to find new homes elsewhere using their housing vouchers.

The move to dismantle the encampment followed a court order last week to clear the property by 9 a.m. Monday. Protesters shouted "shame on you" as the sheriff's officers tore down the encampment. Minor scuffles were reported between protesters and police, but officials said no arrests were made.

Happening now. Sheriff’s deputies, because of a judge’s order, are evicting the encampment at University City Townhomes. @KYWNewsradio pic.twitter.com/yy7eEva9RN

the resistors at the Save UC Townhomes occupation & protest in west philly are getting evicted by the sheriff. their public housing complex, home to black families, is being sold to vulture real estate developers to eradicate the black bottom and expand "university city" pic.twitter.com/aGBPcqOg86

This morning @PhilaSheriff Rochelle Bilal had a choice: stand up for @saveuctownhomes residents or stand up for property capitalists like Brett Altman. Rochelle chose Brett. https://t.co/4CTQRrSxwn

The UC Townhomes conflict stems from developer IBID Associates' decision last year to end a decades-long contract with the U.S. Department of Housing and Urban Development to provide affordable housing at the property. Constructed in the early 1980s, the complex is located in a neighborhood where property values have risen sharply due to the promise of an emerging life sciences sector in West Philadelphia.

Tenants at the property were given one year's notice to find new homes that would preserve their public assistance, but many have complained that the options available would displace them from their neighborhood and put them in less desirable situations.

The original July 8 deadline for tenants to find new homes was moved to Sept. 7 thanks to a temporary extension of the HUD contract.

Rasheda Alexander, a tenant at the property since 2008, said last month that building owners had not provided residents at UC Townhomes with enough resources or suitable options for relocation — especially in a market with rising inflation, fewer landlords accepting vouchers and a backlogged waiting list for subsidized housing in Philadelphia.

"I'm in a different space than many other residents, but the way they went about evicting everyone and the lack of resources they provided, the things that they say they're providing, they're not providing for real," Alexander said.

Community pushback against plans to sell the property also reflect the history of displacement in Black Bottom, a historic, working-class Black neighborhood in West Philadelphia. The UC Townhomes had been intended to provide stable housing for residents pushed out by the expansion of Drexel University and the University of Pennsylvania, but the property and its surrounding area are now coveted for redevelopment that builds on the synergy between higher education and private research labs.

Protesters stopped in front of Penn's President's House at 38th and Walnut streets as part of Monday's demonstrations.

In seeking the court order to dismantle the encampment, IBID Associates had argued that the tents were on private property and that protesters were trespassing. Earlier this year, when Philadelphia City Council passed legislation to preserve UC Townhomes, the developer said it would file a federal lawsuit to defend its "constitutionally protected right" to sell the property.

Monday's protest was among several that have been held this year by groups including housing justice organization Black Bottom tribe, the People's Towhomes Residents Council and the Coalition to Save the UC Townhomes, which is run by Penn students and faculty.

Among the demands listed by the Save the Townhomes coalition are a two-year extension for residents to find new homes — if they ultimately will be forced to leave — and financial compensation from the sale of the property for the families who live currently live there.