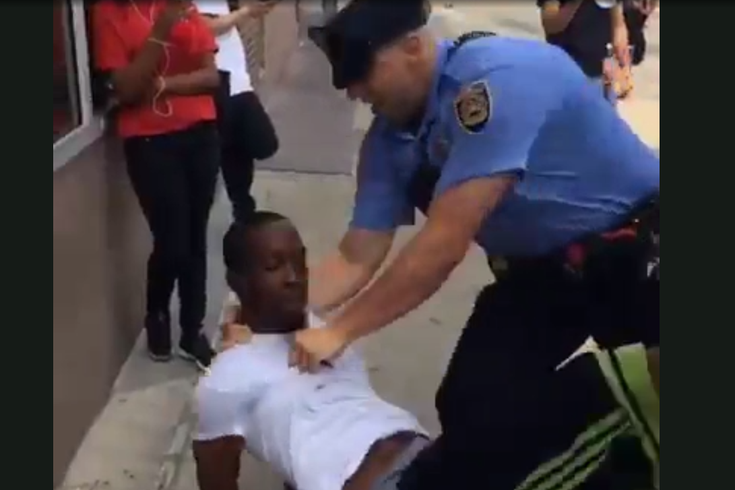 This screenshot is of a video showing a SEPTA police officer throwing a man to the ground after the man refused to sit down. Details regarding the incident are still unknown, and SEPTA Police Chief Thomas Nestel said the outcome of an investigation into the incident is expected by the end of the week.

A new video that has surfaced shows a SEPTA police officer throwing a man to the ground after a verbal altercation.

The video, which has been posted on several websites, appears to show a transit police officer asking a man recording the incident, "How many times do I have to ask you to stand back?" He then tells the man he's going to get locked up.

The officer then turns to a man in handcuffs and tells him to sit down. The man appears to refuse, asking the officer why he is being detained.

The officer tells the man to calm down and sit, but the man continues to ask why he is being handcuffed, claiming the officer put his hands on him for no reason. Then, the officer tackles the man to the ground, telling him to relax before helping him back up.

You can watch video of the incident below (Disclaimer: video contains explicit language):

SEPTA Police Chief Thomas Nestel said Tuesday that an investigation into the incident is ongoing and that a press conference to discuss its results will probably be held Friday.

The outcome of the investigation is expected this week. https://t.co/QpMjYg1N6g

This story will be updated as more details become available.