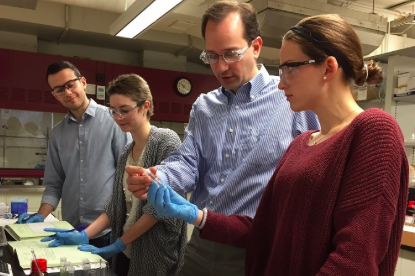 A team of chemistry students at Villanova University is developing a new generation of disinfectants that can keep pace with the adaptation of super bug bacteria that have increasingly become resistant to current drugs.

Kevin P.C. Minibiole, Associate Professor of Chemistry at Villanova, organized the team of undergraduate and graduate students to find a better way to combat hospital-acquired infections – such as pneumonia, MRSA, gastroenteritis, and UTI's – that result in more than 100,000 deaths every year.

As bacteria evolve faster than new disinfectant products can reach the market, the Villanova team is experimenting with more than 300 antiseptic compounds to determine which molecular structures are most effective in attacking resistant bacterial strains.

“We’re following the Edison model of discovery,” says Minbiole. “Lots of trial and error is teaching us what compounds are the most effective and the least toxic.”

In collaboration with Temple University chemist Dr. Bill Wuest, Minibiole and his researchers have published more than a dozen studies and created a spinoff company, NovaLyse Biosolutions, to commercialize the technology. The team is also working with Villanova polymer chemist Deanna Zubris to design a surface material that incorporates the new compounds and could be used in hospitals as a defense against harmful pathogens.

Six members of the Villanova team will present their research in March at the National Meeting of the American Chemical Society.