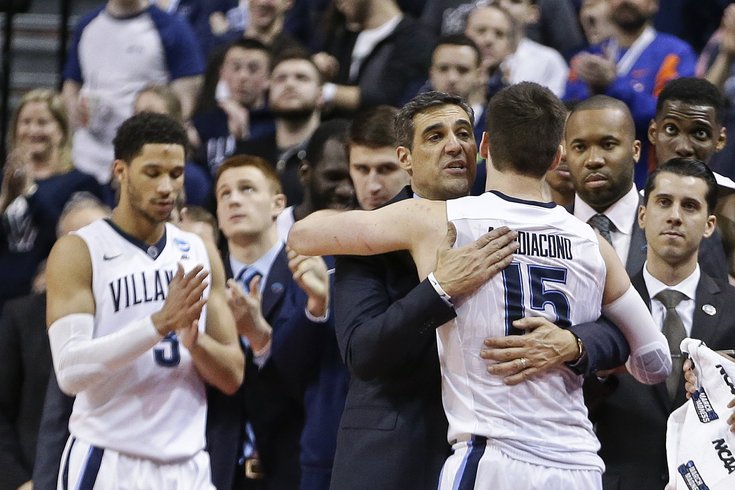 Villanova's Ryan Arcidiacono (15) hugs head coach Jay Wright after being taken out of the game late in the second half.

The Villanova Wildcats are marching on.

In a weekend full of upsets and underdogs advancing, Jay Wright's team made quick work of the Iowa Hawkeyes on Sunday in Brooklyn. The game was never close, as the Wildcats built a 25-point halftime lead, one that would grow to 34 points in the second half, on their way to an 87-68 win in the second round of the NCAA Tournament.

Needless to say, it was a great time to be a 'Nova fan.

And now this guy in GIF form. #MarchMadness pic.twitter.com/1AyXWOWGJI

Here are some observations:

•    There was no stopping 'Nova on Sunday, especially in the first half. The Wildcats established a school record for most points in a half of a tourney game with 54 in the first 20 minutes and did so on 61 percent shooting. It was pure domination.

They finished the game shooting 59.3 percent (32-of-54) and 52.6 percent (10-of-19) from three, including a combined 7-for-11 from Ryan Arcidiacono, Kris Jenkins and Josh Hart. Furthermore, all five starters shot at least 50 percent from the field.

Arcidiacono wasn't far behind with 16 of his own. Jenkins added 15 and Jalen Brunson finished with a dozen.

•    Daniel Ochefu didn't have his best offensive game, but he contributed in pretty much every other way. He scored just six points (3-5 FGs) but added 11 boards, 4 assists, 3 steals and 3 blocks. At one point in the first half, Ochefu was out rebounding the entire Hawkeyes team, 7-6.

He also may wind up on an upcoming edition of SportsCenter's Not Top 10. But we'll give him the benefit of the doubt; he is dealing with a lingering ankle injury.

That's probably not going to make "One Shining Moment."

•    'Nova stifled their opponent's best players. Jarrod Uthoff, Iowa's leading scorer (19 PPG), was held below his season average. The senior forward finished with a team-high 16 points on 6-of-12 shooting. Junior guard Peter Jok (16.2 PPG) was held to just a 11 points on 4-of-12 shooting and he and Uthoff combined to shoot just 4-of-12 from three.

Not only are we going to Louisville, but then we're going to Houston ... YEEEEAAAAHHH!#MarchMadness pic.twitter.com/aznDaTL6Yn

Villanova will face the three-seed Miami Hurricanes in the Sweet 16. It's a fascinating matchup, and one that I've been hoping to see since before the tournament seeds were even announced. They've very similar teams, both in style and makeup, so it should be a heck of a game.