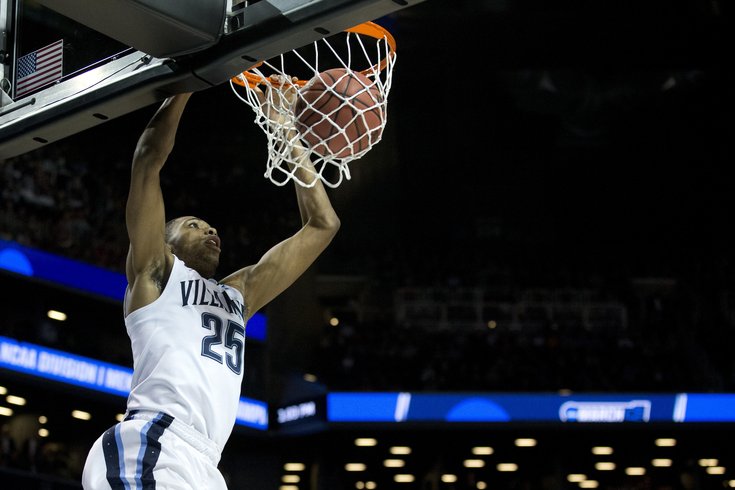 Villanova guard Mikal Bridges dunks during the first half.

Although the final score suggests a blowout, things didn’t get off to a great start Friday for No. 2 seed Villanova, whose lead over 15-seed UNC-Asheville remained in single digits for much of the first half.

But a 16-4 run to end the half, which was capped off by a Ryan Arcidiacono three-pointer at the buzzer, pushed the Wildcats’ lead — one that would never again be less than double digits — to 14 points heading in to the break.

Arch at the buzzer and the Cats are getting Wild https://t.co/ppzwoIqjla

Villanova picked up right where it left off when play resumed in Providence, hitting six of seven shots to open the half. Jay Wright’s team would push that lead to as many as 30 on their way to an 86-56 opening round win over the Bulldogs, setting up a potential matchup in the second round with Big 5 rival Temple, which faces Iowa Friday.

Despite Asheville’s top-ranked three-point defense, the Wildcats were able to shoot 43 percent (13-of-29) from beyond the arc — including a combined 4-of-6 from Arcidiacono — and 57 percent from the field overall (72 percent in the second half alone). That was in large part due to good ball movement, which led to Villanova recording assists on 18 of its first 22 field goals and 21 assists overall.

Another good sign for the ‘Cats moving forward was the play of center Daniel Ochefu, who came into the game with a lingering ankle injury he suffered prior the Big East tournament and has limited his minutes and effectiveness along the way.

That was not the case against Asheville. The 6-foot-11 senior was the first on his team to score in double figures and finished with 17 points (7-9 FGs), 10 rebounds, four assists, and three blocks.

But he was just one of five 'Nova players to score in at least 10 points:

This was just the kind of showing Villanova fans wanted out of their team after it lost in the second round of last year's tournament and left some fans looking like this:

Now, Wright and his team will be able to post up in the stands and scout their second-round opponent -- either Temple or Iowa -- and feel pretty good about the way they're playing.