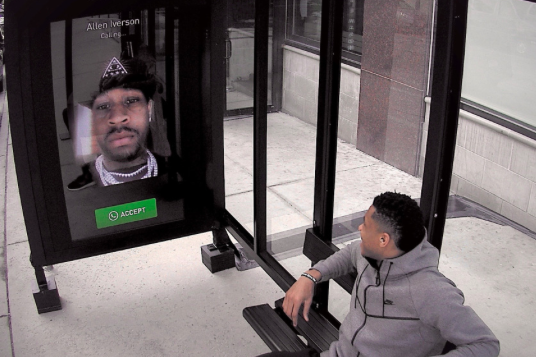 April Fools has never been the same since the advent of the internet. It's a beautiful thing if you're a marketer because social media makes pranks and gags an effortless feat. The holiday (sort of) needed to be reinvigorated.

Philadelphia had its share of April Fools' Day gold in 2017, which you should check out here, but Mountain Dew's promotion in Milwaukee also deserves honorable mention for a special Philly appearance.

One of the NBA's brightest young stars in Giannis Antetekoumpo, best known as The Greek Freak, teamed up with the soda maker to interact with Bucks fans where they least expected it: at a bus stop.

What looks like a run of the mill promotional poster suddenly becomes a live Facetime call, bringing joy to locals who haven't had this much reason for excitement since Ray Allen, Glenn Robinson, Sam Cassell and Michael Redd.

But at the end, Antetekounmpo gets a surprise call of his own from Allen Iverson, a man he cited as one of his top two favorite players growing up (Scottie Pippen was the other one).