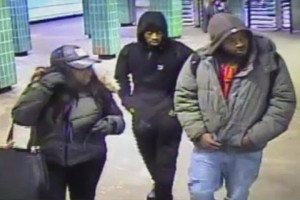 The Philadelphia Police are seeking help to identify these three individuals after a cab driver was shot in Grays Ferry on Feb. 6.

Philadelphia police are seeking help from the public to identify three people wanted in connection with the attempted armed robbery of a cab driver in Grays Ferry in early February.

The cabbie was shot in the shoulder, said police, who gave the following account:

At about 3:15 a.m. on February 6, three individuals – described as two black men and a black female – were seen on surveillance video leaving the subway at Tasker and Morris streets in South Philadelphia.

They waved down a cab, driven by a 38-year-old male, and asked to be taken to 28th and Tasker streets, police said.

When the three arrived at their destination, police said the men pulled handguns on the driver. The man in the backseat pointed a gun through the partition while the man in the passenger seat told the driver to "give me all the money you got."

As the driver continued to drive, police said, both men fired their weapons, striking him in the right shoulder and causing him to crash at 24th and Morris Streets, where the two gunmen and the woman fled into the night empty-handed.

The taxi driver was transported to Presbyterian Hospital, where he was treated for a gunshot wound to his right shoulder and listed in stable condition, law enforcement officials said.