A sky-high look at the 'ponds' on Margate beach 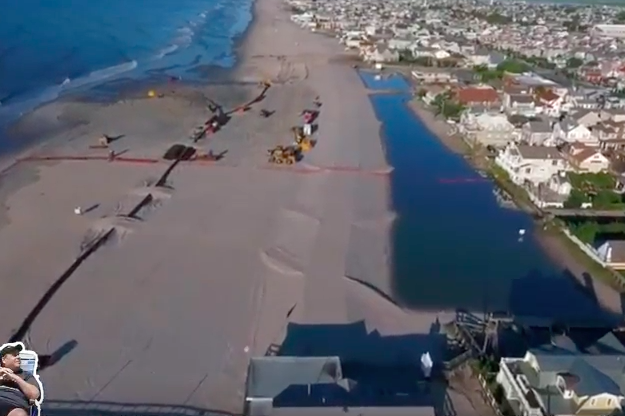 Drone surveys the ponded water caused by the Army Corps of Engineers work building dunes along the Margate beachfront.

The digital site Downbeach Buzz, which covers Jersey Shore towns Ventnor, Margate and Longport, has been all over the dune-building in Margate – and the inadvertent ponding of contaminated water caused by the Army Corps of Engineers.

A popular addition to their site is footage shot from a drone showing just how vast the ponding was earlier this week following a weekend rainstorm.

The eight-and-half-minute video, taken by Ron T. Brown, traces a path up and down the Margate beach, showing a number of ponds – some blocks-and-blocks in length – in front of oceanfront homes.

From one perspective, looking to the ocean from the bulkhead along the beach, the ponds look enormous.

The Army Corps' dune-building work can also be seen.

Margate residents have dubbed the ponding caused by the dune work as "Lake Christie." Many are blaming Republican Gov. Chris Christie for pushing the Margate dune work despite residents' opposition.

Meanwhile, Margate is heading to court in an attempt to block the botched project.