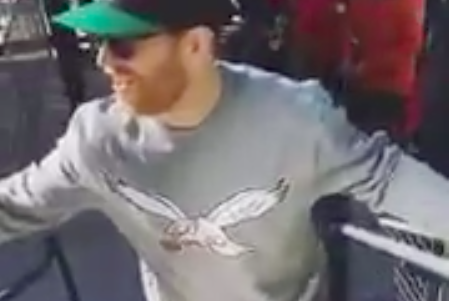 With their backs against the wall, the Eagles muscled out a 24-15 win at home against the Atlanta Falcons on Sunday, keeping them afloat in what figures to be a crowded NFC Wild Card Race.

MORE EAGLES COVERAGE
: Handing out 10 awards from the Eagles-Falcons game | Does Jason Peters have another year left in him? | Matthews on missed call: I don't know if the officials were think about going to Chickie's later

All season long, the Eagles have thrived at Lincoln Financial Field, where the hometown crowd is starting to regain its form as one of the noisier lots in the NFL.

It helps when you have a guy like Flyers center Claude Giroux on your side. Over eight seasons full-time with the Flyers, we've come to know Giroux as a funny man whose Canada-imported humor can be flat out bizarre, a fact he plays up as much as he possibly can. Remember when he bit Erik Gudbranson's jersey?

This came just days after he apparently wiped a booger on a ref.

Then there was the time he got arrested for allegedly "grabbing the buttocks" of an Ottawa police officer. He escaped charges but shelled out $20,000 to a local charity.

One time, Claude made pigeon noises after lobbing the strangest of obscenities at former Flyer James Van Riemsdyk.

All around, he's just a fun guy to hear mic'd up. He talks about golf injuries.

But on Sunday, decked out in Eagles attire, Giroux apparently belted out the team's fight song as he climbed the steps into the Linc. We have a fake Peter Laviolette Twitter account to thank for this (h/t Crossing Broad).