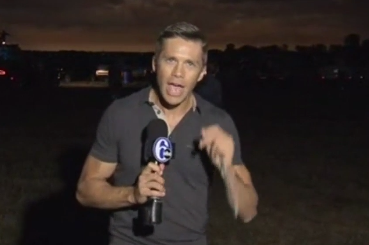 Special occasions call for special arrangements and yesterday's solar eclipse, the first to sweep coast-to-coast in the United States since World War I, had the power of a "primal experience" for some who witnessed the celestial marvel.

For 6ABC meteorologist Adam Joseph, the assignment was a chance to hit the road to St. Joseph, Missouri, a town that found itself in an eclipse's path of totality for the first time in 211 years. For astronomers and thrill seekers, St. Joseph became a destination on Monday.

Not long after 1 p.m., the large field at the Rosecrans Airport was blanketed in darkness, and Joseph had a bit of a moment. Who can blame him, really?

The video below is one of the best displays you'll see of the eeriness of a total eclipse.

Photos and observations from across the country filled social media timelines on Monday, offering a collective celebration of science and a chance to crack a few creative jokes.

What really happens during an eclipse #SolarEclipse2017 #Eclipse https://t.co/sox0PrThQa pic.twitter.com/ZC0n56KooT

Next time around, when the moon's orbit passes between the sun and the earth in April 2024, Philadelphia will see 90 percent coverage and western Pennsylvania will sit in the path of totality.