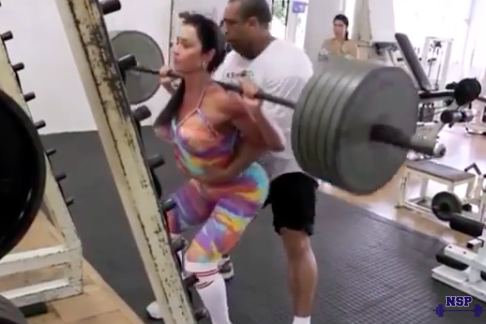 During the bygone era of Barry Bonds, Sammy Sosa and Mark McGuire, our thirst to see feats of superhuman strength and skill often superseded questions about whether or not cheating was involved.

That was several years before the emergence of social media put this tendency of ours on steroids, so to speak.

Over the past two weeks, two of the online world's biggest names in weightlifting have been accused of using fake plates in order to generate buzz for their personal pages and brands. One of them, Brazilian fitness model Gracyanne Barbosa, has now touched off an uncomfortable debate about objectification for profit and the abuse of social media to outshine others who are legitimately accomplished powerlifters.

Late last month, American weightlifter Brad Castleberry was shown to have allegedly used fake plates to boost his views and shares on social media. The case, made by notable bodybuilder Nick Miller, relied on a video analysis of Castleberry's reps to spot physical evidence that his weight loads were inflated.

Despite posting world records at his weight, Castleberry steadfastly refuses to compete in professional contests with money on the line. He has enough of a following on his own to sell workout supplements, apparel and training advice online. There's no question Castleberry is jacked — he's doing something right to maintain that appearance — but how wrong would it be for "The Manimal" to profit marginally more off of fraudulant lifting videos?

Miller decided to push the matter even further with Barbosa, an Instagram powerhouse who has more than 5.2 million followers. A video published last week under the title, "Fake Plates and a Fake Butt," likewise accused Barbosa of staging a workout session. When the video initially fell flat, Miller speculated that YouTube's policy to suppress certain controversial topics and tags kept his exposé from going viral.

On Sunday, Miller republished the video under a new title, "Girls are using fake weights now too?" This time, the video garnered more than 625,000 views within a day.

The video set off a heated discussion on Reddit, where many users denounced Barbosa's fame as a lucrative gimmick and an example of what's wrong with the financial levers of social media. Barbosa, who is married to celebrity samba singer Belo, previously appeared on the cover of Brazil's Playboy and has faced similar accusations about using fake plates in the past.

Neither Castleberry nor Barbosa has responded publicly to Miller's accusations.