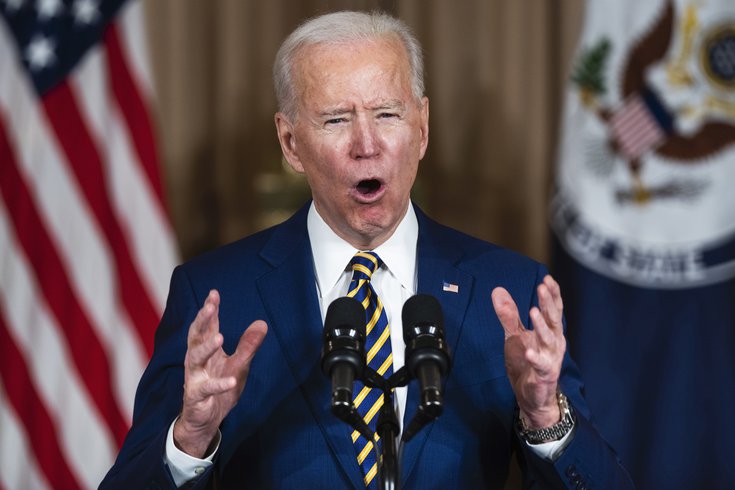 President Joe Biden will give his first prime-time address at 8 p.m., Thursday, March 11, marking one year since the start of the COVID-19 pandemic. Watch the speech in the live video embedded below.

President Joe Biden will address the country Thursday night to mark one year since the start of the coronavirus pandemic, and reportedly will set the goal that all Americans become eligible for the COVID-19 vaccine by May 1.

The speech begins at 8 p.m. and be delivered from the White House. It is Biden's first prime-time speech to the nation as president. He will talk about the impact of the COVID-19 pandemic, as well as "what comes next," for the United States, the president said during an event Wednesday with vaccine makers Johnson & Johnson and Merck.

"I’m going to launch the next phase of the COVID response and explain what we will do as a government and what we will ask of the American people. There is light at the end of this dark tunnel of the past year, but we cannot let our guard down now or assume that victory is inevitable," Biden said.

The Washington Post reported Thursday evening that Biden will make a push to have all Americans eligible for the vaccine by May 1, in hopes that the country participate in small-group celebrations by July 4.

The president will also "discuss the many sacrifices the American people have made over the last year and the grave loss communities and families across the country have suffered," White House Press Secretary Jen Psaki said

Thursday, March 11, is the one year anniversary of when the World Health Organization declared COVID-19 a pandemic. On the same day, former President Donald Trump announced the European travel ban, adding to an existing ban on travel between the U.S. and China to limit the disease's spread.

People will be able to watch Biden's prime-time speech on live television or online streams provided by several of the major news networks, including ABC, CBS, CNN, PBS, Fox News, NBC, and more.

The livestream embedded below will also show the speech.

The speech also will likely address "The American Rescue Plan," Biden's $1.9 trillion coronavirus stimulus package, which the president signed into law Thursday. Next, Biden goes on a media tour meant to promote the bill's benefits, among them the $1,400 stimulus checks that will be mailed to millions of Americans later this month.

Delaware County will be the first stop on the tour. The president and first lady will arrive Tuesday. The location of the visit has not been made public, yet.

The first couple's Delco appearance will be Biden's first trip as president. White House officials said it is limiting the president's travel schedule due to COVID-19.