Cameras are fixed on the nests and expecting parents 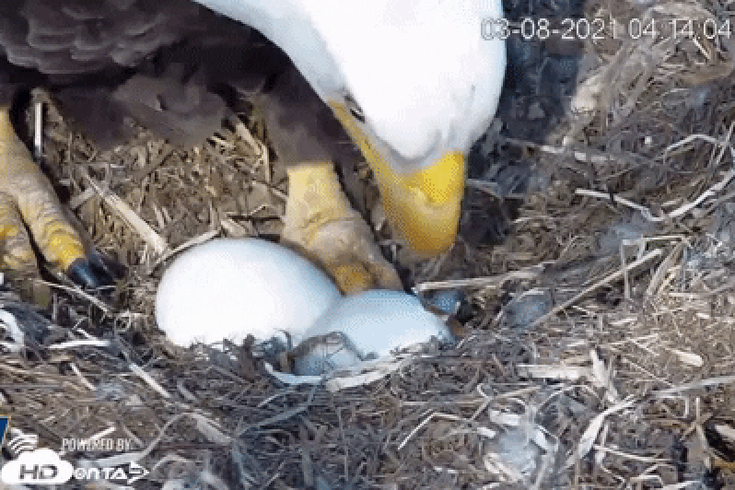 The bald eagle cam at Codorus State Park in Hanover, Pennsylvania is one of three that will show eggs hatching in the coming days after they were laid in early February.

Three different bald eagle nests in Pennsylvania will soon see their eggs hatch as the young chicks get ready to break through their shells.

The Hanover nest at Codorus State Park and the Farm Country nest, whose location is undisclosed, are both on track for eggs to hatch in the coming days. The livestreams are run through a partnership between HDOnTap, Comcast Business and the Pennsylvania Game Commission.

Are you getting antsy waiting for pips to appear in the #Hanovereagles and #PAfarmcountry eggs? Read more about what's going on under there on our blog here: https://t.co/ofai9U3ryP pic.twitter.com/2UjlIPEEdC

The Hays nest, located in Pittsburgh, is presented through a partnership between the Audubon Society of Western Pennsylvania and PixCams.

Bald eagle eggs typically start to hatch about 35 days after they are laid.

The first eggs at the Hanover nest were laid on Feb. 2 and Feb. 5. The female at the Farm Country nest laid her eggs on Feb. 5 and Feb. 8.

That puts all of those eggs on schedule to hatch in the coming days, or possibly a little later this month.

In partnership with HDOnTap, raptor ecology specialist Zoey Greenberg has a blog where she discusses developments at the Hanover and Farm Country nests, offering educational insights about the things viewers might see on the livestreams.

In her most recent blog, Greenberg discussed misconceptions about birds hatching from eggs and detailed how the process really works for bald eagles.

As it turns out, breaking free from an egg is an arduous task for any young chick:

To do so, it develops an egg tooth, which is essentially a hard calcium nub at the tip of the bill that allows the chick to knock against the shell and “break through the walls of [its] prison,” as described by William Yarrell, the ornithologist credited with discovering the tooth’s function. Reptiles and egg-laying mammals such as the platypus also have an egg tooth. For most birds, the egg tooth falls off after hatching, however some birds (including finches and sparrows) actually absorb the tooth back into their bill!

Eventually, with enough vigorous pecking, called “pipping,” the chick breaks through the eggshell and takes its first breath of fresh air. This infusion of energy allows it to continue hammering away, while simultaneously rotating its body and pressing against the shell. Finally, the chick breaks free.

The pending arrival of the chicks in Pennsylvania comes after several eagle chicks hatched at New Jersey's Duke Farms nest in Somerset County.

Predicting exactly when the Pennsylvania eggs will hatch isn't easy, but you can keep an eye HDOnTap's Twitter account to follow along for updates on the Hanover and Farm Country nests. Both cameras also include a highlights page where viewers can check in on moments they've missed.