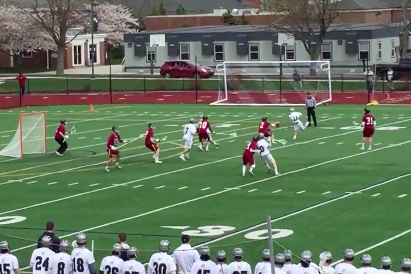 The etiquette behind trick plays is all about finesse and execution, no matter which sport or scenario summons them from the playbook. It's pretty rare to see a dastardly onside kick like Andy Reid's opening day salvo against the Cowboys in 2000, but the high school ranks are much more fertile for this kind of ploy.

On Saturday, Malvern Prep's lacrosse team was knotted up at 10-10 against Garnet Valley with just three seconds remaining on the clock.

Rather than drive to the net for a final shot and prepare for overtime, the 5-1 Friars, led by coach John McEvoy, decided to pull a fast one on the Jaguars: the hidden ball.

In the video below, No. 2 acts as if he's passing the ball off to No. 20, who motions as a decoy to draw the defense in his direction. Meanwhile, No. 2 casually sidesteps toward a wide-open teammate who finishes the job against Garnet Valley's unsuspecting goalie.

.@MPFriars gets the game-winner from Billy Coyle with 2.9 left. Friars rally to beat @gvjagslax, 11-10. pic.twitter.com/LEbbtZfZfr

This all goes to show that it never hurts to practice those doomsday, buzzer-beating situations. Props to Malvern Prep on their sixth win of the season.