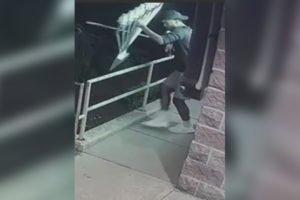 The Philadelphia Police are seeking help from the public to identify this man, who police said, stole a menorah from the front lawn of a synagogue in Northeast Philly.

Philadelphia police are seeking help from the public to identify a man who took a large menorah from the front lawn of a Jewish synagogue and community center in Northeast Philadelphia.

The theft occurred at about 3:02 a.m., on Aug. 20, when several people were spotted on surveillance video walking by the Congregation Beth Solomon Synagogue and Community Center at 198 Tomlinson Road in Somerton.

While the group headed east on Tomlinson Road, the video shows a male suspect running across the road and onto the synagogue's property, where he removes a metal menorah from the front lawn and carries it away.

The suspect then ran back to rejoin the group and they all continued walking east on Tomlinson Road, police said.