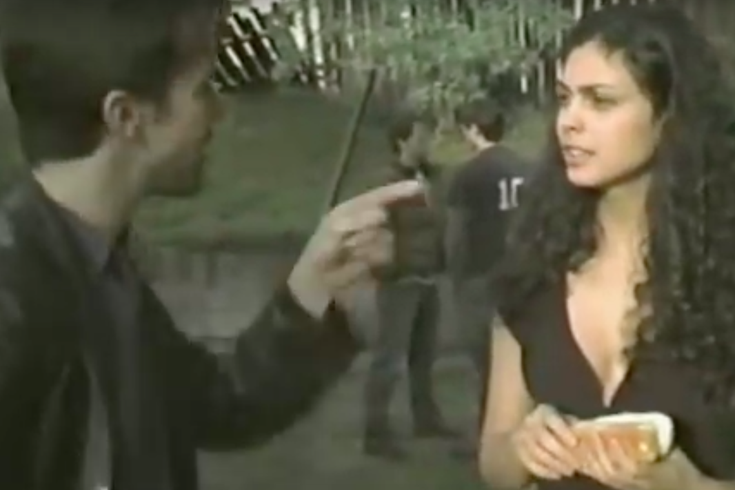 Mac meets Carmen, played by Morena Baccarin, in the pilot of "It's Always Sunny in Philadelphia."

It looks like it's going to be a long while before we'll be getting any new episodes of "It's Always Sunny in Philadelphia," so now's a good time to take a trip down memory lane.

Diehard fans of the series, now 12 seasons in, are likely familiar with the fresh-faced origins of the Gang, who scrounged up somewhere between $85-$200 to produce the grainy homemade pilot "Charlie Has Cancer." This was before the show was even set to take place in Philadelphia. Danny DeVito and Kaitlin Olson weren't yet in the picture.

A little-known fact about the pilot, which later became the premise for the fourth episode of season one, is that "Deadpool" and "Homeland" star Morena Baccarin made a brief cameo as a woman Mac suspects of, well, having a penis.

Baccarin recently appeared on "Conan" to talk about what's new in her blessed life, and one of the topics O'Brien brought up was that role as Carmen.

"It's Always Sunny in Philadelphia" has a history of landing famous guest stars, including Chase Utley and Ryan Howard, Christopher Lloyd, Sinbad and Rob Thomas and Sean Combs. Cheers to Baccarin for stepping into the kind of Finkel and Einhorn joke that caught the attention of the people at FX.