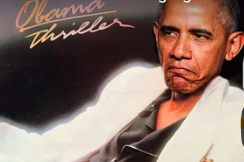 President Obama dons the cover of the King of Pop's 1982 chart topper 'Thriller.'

One of the great outgrowths of Internet culture is the overdub video, popularized by the "Bad Lip Reading Series" and others who have brought us such classics as "Will the Real Mitt Romney Please Stand Up?" and Chris Christie declaring that, as a kid, he "just wanted regular potatoes."

On Friday night, the Obama family hosted their annual Halloween costume event, including a trick-or-treat party on the White House's South Lawn. Hundreds of children, many from military families, turned out in their best disguises for a spook in the "enchanted forest," decorated with woodland creatures, a skeleton on a trapeze and ghosts on swaying poles.

While the president didn't dress up himself, he was particularly enamored with one baby who came dressed as the pope on wheels.

The rest of the kids in attendance received collectible baseball cards of Obama's dogs, Bo and Sunny – an oddity that should be worth something in 50 years – and specially made White House Halloween cookies.