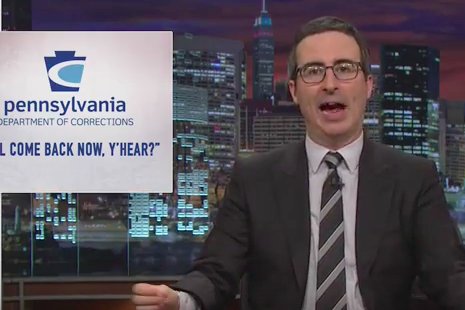 John Oliver gave one of his patented detailed breakdowns of the nation's prison reentry issue Sunday on HBO's Last Week Tonight after the U.S. released 6,000 federal prisoners, most of whom were drug offenders who received harsh sentences.

During his monologue, Oliver looked at prisoner recidivism rates in the country and took a critical shot at the Pennsylvania Department of Corrections.

He highlighted a report from the Brennan Center for Justice that found, "In Pennsylvania, persons in prison are ineligible for parole unless they pay a $60 fee that makes no exception for the indigent."

Oliver uses a clip from a Vice News report about a Pennsylvania inmate who said he began selling drugs just to pay the state as an example of the system's shortcomings.

The comedian jokes that the Department of Correction's new slogan should be "ya'll come back now, ya hear?" Watch the video below: