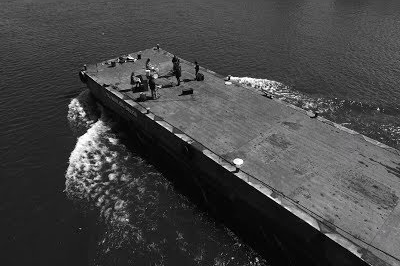 "Pain" is a track on "A Deeper Understanding," the fourth full-length album from The War on Drugs.

Fans who have been anxiously awaiting the release of "A Deeper Understanding," the fourth studio album of local breakout rockers The War on Drugs, are just a few days away from getting a full 10 tracks of the extended, dreamy ballads the band owns better than any other act on the scene.

While frontman Adam Granduciel and company have already released or performed five songs from the upcoming album, their latest music video, "Pain," hits home in more ways than one.

Not only is "Pain" a deeply moving song that might make you tear up, but the majority of the video is shot on 16 mm black-and-white film as the band cruises down the Schuylkill River. Directed by Emmett Malloy, "Pain" captures sights and scenes from around Philly, recreating an old-fashioned look that suits the city and the band well.

The War on Drugs took a big leap with "A Deeper Understanding," signing a deal with major label Atlantic under the condition that they have complete creative control, which they enjoyed on previous records with Secretly Canadian. The band will release two albums with Atlantic.

Granduciel, featured recently in The New York Times, said he intends to keep Philadelphia the home base of The War on Drugs. After spending time in Los Angeles and New York following the global success of 2014's "Lost in the Dream," the band has set up shop at a warehouse in South Philadelphia.

"A Deeper Understanding" is out Friday, Aug. 25.