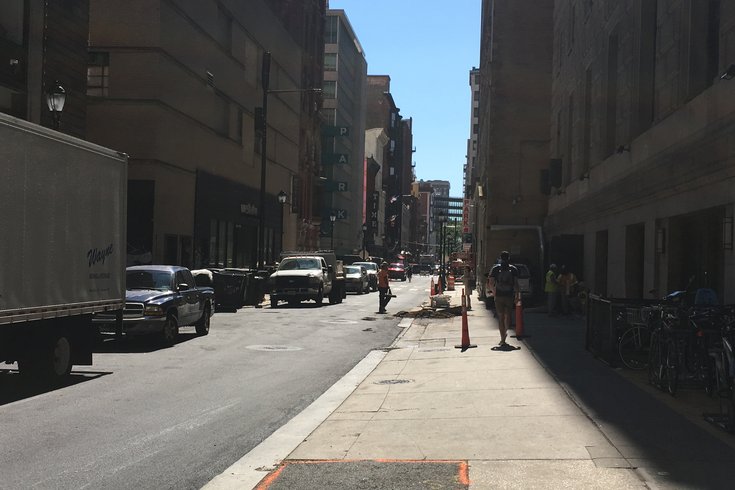 A line of Philadelphia Police bicycle officers refused to let a group of protesters pass the security perimeter line near 12th and Sansom streets on Thursday, January 26, 2017.

With Congressional (and other) Republicans in town for a three-day retreat that wraps up Friday, the wave of protests that have seemingly followed President Donald Trump throughout his post-inaugural days made its way to the streets of Philadelphia.

Sure, he was only here for a few hours – though that was enough time for him to make comments that local officials pushed back against as “false statements."

And enough time to energize and mobilize thousands upon thousands of protesters who assembled along the security perimeter outside Center City’s Loews Philadelphia hotel, where he was speaking around lunchtime.

In other cities, we’ve seen pitched conflicts between protesters and law enforcement result in the use of tear gas and arrest powers.

Here, though, there was nothing of the sort.

Part of that can be chalked up to a symbiosis that sees police and protesters touching base before events along these lines commence. Part of it can also be chalked up to a law enforcement mindset that values cooperation and placating people who complain about traffic implications.

I know blocked traffic is frustrating and darned inconvenient but peaceful protest is something we should always support in our America. https://t.co/YZXfgBJkxm

In the end – according to a Philadelphia police spokesman on Friday morning – Thursday’s massive protests resulted in exactly zero arrests and one citation for disorderly conduct.

Don’t take that to mean that everybody was on their best behavior, though.

At one point, around 5:30 p.m. at 12th and Sansom streets, that brokered peace looked to be at risk of crumbling when protesters tried to breach a police line at the edge of the security perimeter.

Earlier, droves of protesters who mustered in Rittenhouse Square marched out onto 18th Street around 4:30 p.m..

“No Trump! No KKK! No Fascists in the USA!” protesters under an array of banners (immigration, drone warfare, Black Lives Matter, and more) chanted.

“Who’s streets? Our streets!” went another chant. “This is what democracy looks like!”

“Hey, hey. Ho, ho. Donald Trump has got to go!” were the words that echoed off walls as the group made its way onto Chestnut Street for the march to Broad.

When the front of the group reached City Hall, Asa Khalif of Black Lives Matters Pennsylvania held them up so the rest could catch up.

Among those watching from behind barriers was Connor Barwin of the Philadelphia Eagles. He was walking his puppy and laughingly declined an offer to take an anti-Trump protester’s megaphone to chime in.

With people joining in along the route, their path wound up Filbert Street past the Reading Terminal Market, and up 11th Street to the security perimeter’s eastern edge. Seeing they couldn’t breach that police line, they went up 10th Street to a Walnut Street that hadn’t been closed off to traffic. 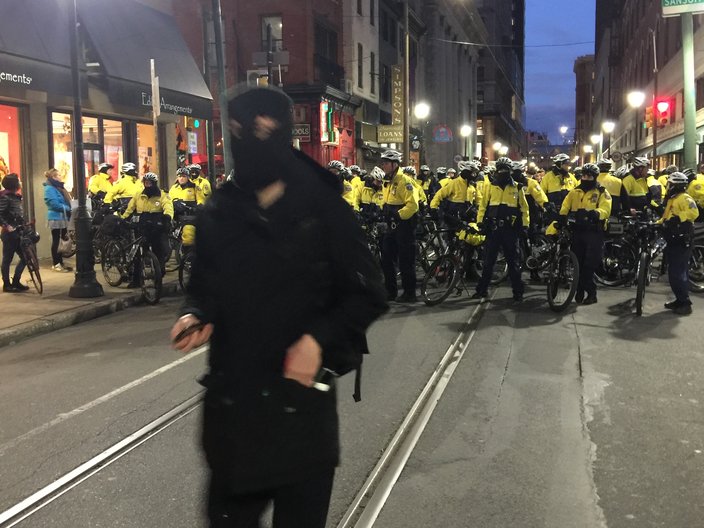 One protestor remained behind after a police line held against marchers trying to get to the Loews Philadelphia Hotel on Thursday night.

The drumbeats and chants got louder as the group turned up 12th Street heading back toward the Loews. A cavalcade of police officers on bicycles awaited at Sansom. The march came to a standstill.

The chanting turned to border walls having to go (from Palestine to Mexico). Mara Henao and Khalif were among those near the front of the pack.

“We got a bunch of cops up here trying to stop us,” she said into the portable mic. “Are we gonna let em do it?”

“No!” came the response.

Henao, Khalif and other march leaders discussed their best path to get to the Loews – which was hosting the Congressional retreat – as a “this is what the police state looks like” chant came up from the crowd.

Through the wall of police line emerged as the popular choice.

At that point, a bunch of pushing and shoving broke out, mostly from the law enforcement side trying to establish distance between the sides. One female officer swung her baton at nobody in particular (making no contact).

“Who do you protect? Who do you serve? Not us!” became the new chant.

By the time the minute-long conflict dissipated, police were lined up about five-deep at the corner. The marchers pulled a tactical retreat.

The march went on into the night. While the demonstrators never reached the Loews on Thursday night, one man chanted his message from behind a black mask outside the iHop on Chestnut Street.

“Welcome to your every day,” came the response.