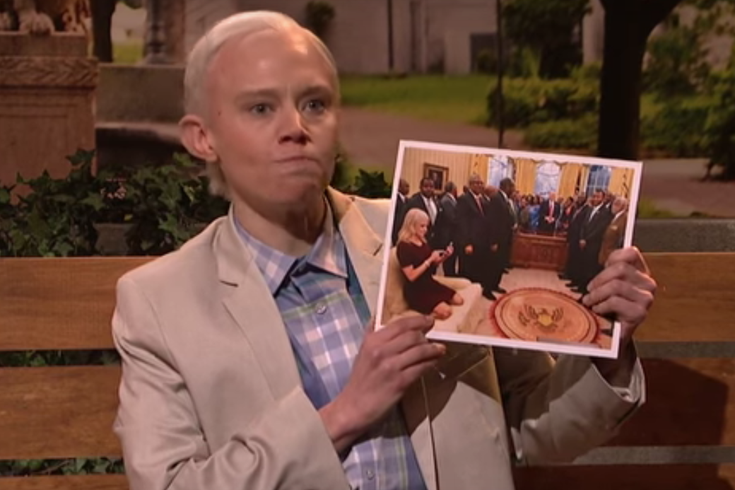 The Donald Trump Administration has given comedy writers plenty of fodder to use over its first six weeks in power, but 'Saturday Night Live' might be slowing down under the weight of all that material.

However, the show was notable for the performances that fans tune in expecting to see but didn't appear. Namely, Alec Baldwin's bumbling portrayal of President Trump and Melissa McCarthy's boisterous take on press secretary Sean Spicer were noticeably absent.

U.S. Attorney General Jeff Sessions and White House counselor Kellyanne Conway weren't as fortunate because cast member Kate McKinnon was ready, willing and able to take them to task for their recent actions.

In the show's cold open, McKinnon reprised her role as Sessions but with an added twist. The skit turned the embattled attorney general into the naive yet compassionate Forrest Gump character.

While waiting for the bus, McKinnon's Sessions shared his experience working in the government with unsuspecting people who sit next to him on the bench. He couldn't wait to tell someone about his "best good friend" Conway and the much-talked-about photo of her kneeling on a couch in the Oval Office.

"She ain't got no legs," McKinnon’s Sessions said, referring to the 1994 film's Lt. Dan character. "We're about as close as peas and carrots. She's the best talker you ever heard. They say she could sell stink to a skunk but they don't let her talk anymore."

The next person heard all about Sessions' "bad week" and his possible contact with Russia. It was just a misunderstanding, McKinnon’s Sessions claimed.

"I met with a fellow who turned out to be Russian on the account of he was the Russian Ambassador," he explained.

To avoid a forced resignation, "I just have to prove to everybody that I don't have any ties to the Russians whatsoever," McKinnon’s Sessions decided before a quick meeting with Beck Bennett's shirtless Russia President Vladimir Putin character.

The photo of Conway was featured throughout the show, including during Father John Misty's performance and Weekend Update.

Wait for it... #SNL pic.twitter.com/F0vf6NXyak