Dockless, shared-scooter companies recently learned they can't set up shop in Philly ... yet 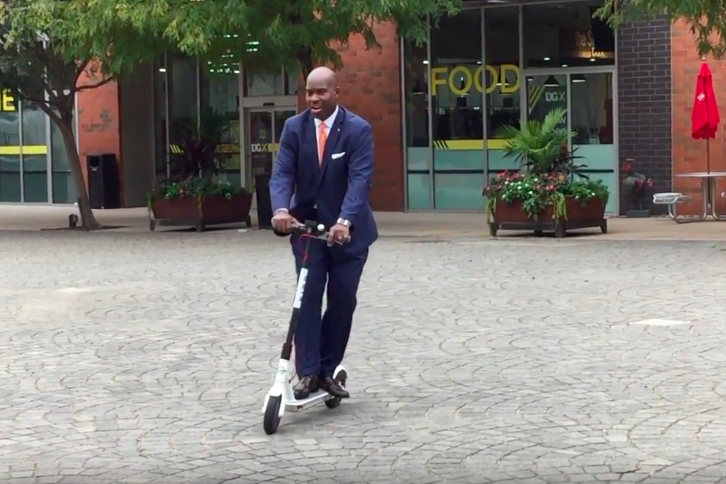 Philadelphia City Councilman Derek Green takes a spin on an e-scooter during a 'pop-up demonstration' at the Piazza at Schmidt's Commons on Friday October 26, 2018.

The sign posted at the entrance to The Schmidt’s Commons declares that “no bikes or motorized vehicles” are permitted. Moreover, state law doesn’t allow for the use of electric scooters on Pennsylvania roadways or sidewalks.

But that didn’t stop an e-scooter company keen on expanding to Philadelphia from coming to Northern Liberties on Friday with a pop-up demonstration that had two city councilmen and a state senator from taking spins around the Piazza.

Bird, a company based in Santa Monica, California, has already established scooter-share fleets in some 100 cities across the globe, with many in America.

Its path to Philly got a bit more complicated in recent days, though, as the company learned a city ordinance regulating shared two-wheel vehicles might not apply to e-scooters as it does to bicycles. PennDOT deems the vehicles street-illegal at present, as well, which supersedes a city ordinance.

Bird’s director of public policy, Matthew Kopko, said the company still hopes to work with local elected officials to set up a pilot program so the city can see how it works and go from there.

On hand for the pop-up demonstration were state Sen. Larry Farnese and Councilmen Mark Squilla and Derek Green, all of whom rode – and did not embarrass themselves (which would have been better for video purposes, of course) – on an e-scooter.

The scootering elected officials were there to consider whether a pilot program could work here and start a conversation that could lead to the formal arrival of the dockless shared-vehicle program.

Kopko said scooters help with traffic congestion, cut down on carbon emissions and help commuters get around downtown without relying on rideshares like Uber for shorter rides.

He dubbed it a “21st century transportation solution.”

“We think the city has the authority to do a pilot program,” he said near the five scooters on hand for people to try out.

With their revenue-sharing model on a projected 1,000 scooters in Philly, the city could reap “hundreds of thousands of dollars if not a million-plus. We’d love to be a part of this,” Kopko added.

For his part, Squilla noted a lot of conversations need to occur before such a leap could be made with Bird or another company named Lime. After all, city motorists, bicyclists and pedestrians have a hard enough time co-existing in harmony as it is. Parking, scooters on sidewalks and safety are the biggest concerns, he said.

“This could be worked out. Eventually, it will be here,” he said, noting that it’s different than the ATV/dirt-bike discussion, as those vehicles are explicitly illegal but the e-scooters aren’t directly banned. “In the best-case scenario, everyone will sit down and hear concerns as the city moves forward, and hear what worked and what remain problems in other cities that have them.”